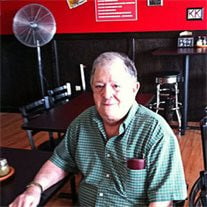 White River Jct., VT- James Anthony Cantore, 87, died August 23, 2015 after a long and prosperous life loved by his family and friends. Jim was born August 16, 1928 in Schenectady, NY the only child of Vincenzo (James) and Grace (Colozze) Cantore. Jim graduated from the University of New Haven with a BS in 1971 and a Master's Degree in 1975. He was married to Betty Irene (Doyle) Cantore at St. Anthony's Catholic Church in Schenectady, NY on November 4, 1951. Betty and Jim were married for 56 years until Betty's death in 2007. From 1953 to 1957 they owned the Sugar Bowl Diner on Albany Street in Schenectady. Betty and Jim left Schenectady to move to Beacon Falls, CT in 1957 and then moved to White River Jct., VT in 1974. Mr. Cantore started his career with the United States Post Office in 1962. He started as a letter carrier and rose to Post Master of Lebanon, NH, culminating a 30 year career. Jim served one year in the New York Guard at the age of 16 and two years in the US Navy from 1945-1947. He then joined the Air Force Reserves in 1959 and retired 30 years later in 1989 as a Senior Master Sergeant. He is predeceased by his parents, wife and several beloved cousins. Mr. Cantore is survived by his four children and 8 grandchildren. Jim Cantore of Atlanta, GA and his two children Christina and Benjamin James. Paula Cantore of Windsor, VT and her daughter Tonnie. Vincent Cantore of Quechee, VT his wife Tarah and their daughters Brittany and Molly. Carole Cantore Dotson of Lake City, FL her husband Dennis and their three children Dugan, Timothy and Luke James. Friends may call at the Knight's Funeral Home in White River Jct., VT from 6-8 PM Thursday August 27. Calling Hours will also be held from 5-7 PM Friday August 28 at the Rossi & Ditoro Funeral Home 501 Union Street, Schenectady, NY. A Catholic Mass of Christian Burial will be celebrated Saturday August 29, 9 AM at St. John's Church 806 Union Street, Schenectady, NY. Interment will follow at the St. Anthony's Cemetery in Glenville, NY Donations will be accepted at www.FRAXA.org in memory of James Cantore and his love of his grandchildren with Fragile X Syndrome.

The family of James A. Cantore created this Life Tributes page to make it easy to share your memories.

Send flowers to the A. Cantore family.