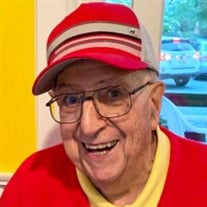 Herm DiMeo, 96, joined his beloved wife Rita in Heaven on Saturday, April 10, 2021. Herm, the youngest son of Giuseppe and Assunta (Massaro) DiMeo, was born in Schenectady, New York on March 9, 1925. He was a 1943 graduate of Nott Terrace High School and joined the U.S. Army as an infantryman that same year. In January of 1944, Herm and his brother Lou were assigned to the 90th Infantry Division, also known as the “Tough ʼOmbres.” Herm and Lou served in the 358th and 357th Regiment, respectively. They landed at Utah Beach in Normandy, France on June 10, 1944 (D-Day Plus 4) and fought side by side in the hedgerow fights of Normandy in the weeks that followed. Herm was captured by German paratroopers and held as a prisoner of war at Stalag IV-F for ten months until the camp was liberated by the Russian Army in 1945. Herm was honorably discharged at the rank of Corporal and awarded the POW Medal, the Combat Infantryman Badge, the European–African–Middle Eastern Campaign Medal, and the Rifleman Expert Medal for his service in World War II. In 2020, Herm was also belatedly awarded the Bronze Star Medal for meritorious achievement during combat operations and praised for displaying the highest degree of professionalism, leadership, and courage under fire. After the war, Herm reunited with his brothers Ralph, Lou, and Nick, back home in Schenectady. He started work as a mail carrier for the United States Postal Service, where he served his community for over 35 years. Outside of work, Herm was an avid bowler and golfer, and he was a founding member of the Van Vranken Golf League, the oldest league at the Schenectady Municipal Golf Course. As anyone who played with him knows, Herm was a force to be reckoned with on the fairways, and he won the Van Vranken League Championship eight times between 1957 and 1991. Above all else, Herm dedicated his life to those he loved. He leaves behind a legacy of devotion and untiring selfless service that will be remembered by all who knew him. His proudest moments were seeing all five of his children graduate from college, which were only surpassed by the births of his eight grandchildren. Herm was predeceased by his dear wife of 72 years, Rita (Krone) DiMeo, in 2019. He was also predeceased by his eight older siblings: Lucy Paro, Rose Bove, Angelo DiMeo, Ralph DiMeo, Lena Schettina Stella, Louis DeMeo, Nicholas DeMeo, and Virginia “Jean” Gumienny. He is survived by his loving children: Susan (Charles Willand) DiMeo, James (Maureen) DiMeo, Diane DiMeo (David) Dickinson, John (Shari) DiMeo, and Robert DiMeo; grandchildren: Elise (Matthew) Sievert, Paul, Jill, Peter, and James DiMeo, and Katie, Kristie, and Jenna Dickinson; brother-in-law Bruce Sharron; and many loving nieces and nephews. We wish to thank the VA Albany, VA Boston, Home Helpers of MetroWest, and Home Based Primary Care for their compassionate care, as well as all of Herm’s extended family and friends for their lifelong love, support, and recent visits to Boston. Visiting hours will be held on Friday, April 16th from 4:00–8:00 pm at the Rossi & Ditoro Funeral Home, 501 Union Street, Schenectady, NY. A Mass of Christian Burial will then be celebrated at St. Anthony's Church, 331 Seward Place, Schenectady, NY, on Saturday, April 17that 11:00 am. The burial will follow at St. Anthony Cemetery, 27 Glenridge Rd, Glenville, NY. Friends and family are welcome to attend all of the above. "... In lieu of flowers, memorial contributions may be made in Herm’s memory to the Purple Heart Project, which can be located at www.robcosman.com/products/how-to-help.": To designate that your donation is in memory of Herm, please send an email to [email protected]

Herm DiMeo, 96, joined his beloved wife Rita in Heaven on Saturday, April 10, 2021. Herm, the youngest son of Giuseppe and Assunta (Massaro) DiMeo, was born in Schenectady, New York on March 9, 1925. He was a 1943 graduate of Nott Terrace... View Obituary & Service Information

The family of Herman J. DiMeo created this Life Tributes page to make it easy to share your memories.

Send flowers to the DiMeo family.