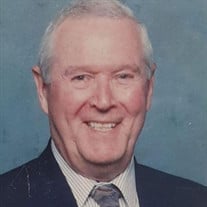 HALFMOON - Henry A. ‘Hank’ Jolicoeur, 93, passed away on Saturday, September 5, 2020 peacefully at his home with his beloved wife Anita, at his side. Hank was in born Cohoes on January 21, 1927 a son of the late Joseph and Ann Louise (Macy) Jolicoeur. He was a graduate of Cohoes High School and began his military service at the Watervliet Arsenal in 1943. Hank honorable served as a Coxswain Sr. Non-Commissioned Officer on the USS Lenawee. (A ship abound, south for the equator to an unknown port in the war zone during WWII). After his honorable service to his country, Hank worked for the General Electric Silicone Plant in Waterford, retiring in 1985 after 36 years of service. He spent many summers at his home on Lake George where he especially enjoyed boating on his vintage Chris-Craft. He was energetic and full of life; an avid bocce ball player, bowler, golfer, NY Giant and Yankee fan. In recent years, Hank delighted in sitting on his deck enjoying the natural habit and woodland birds and animals. He and his wife are communicants of St. Mary’s Church, Crescent. Hank was a gracious and kind gentleman, who lived his life with a deep conviction of his catholic faith. Hank was married Minnie Scarchilli Jolicoeur for many years, until her passing in 2002; he was also predeceased by his siblings, Joseph and Raymond Jolicoeur, Florence Marion, and Yvonne Mudry. Hank is survived by his loving wife of 16 years, Anita Lacay aka Babes, which he so lovingly called her; five step-children; three step-grandchildren and his mother-in-law, all of Cebu City, Philippines; several nieces, nephews; and dear friends in Texas and the Capital District. Services will be held on Thursday at 8 am from the Catricala Funeral Home, 1597 U.S. 9, Clifton Park, followed by a Mass at 9 am at St. Mary’s Crescent, 86 Church Hill Road, Waterford. Interment with military honors will follow in St. Mary’s Cemetery, Waterford. Relatives and friends may call at the Catricala Funeral Home on Wednesday from 5 to 7 pm. Hank had a special passion in his heart for all of his canine buddies, for those wishing, memorial contributions may be made in Hank’s memory to the Mohawk Hudson Humane Society at mohawkhumane.org or St. Mary’s Church, Crescent, 86 Church Hill Road, Waterford, NY 12188.

The family of Henry A. 'Hank' Jolicoeur created this Life Tributes page to make it easy to share your memories.

Send flowers to the Jolicoeur family.