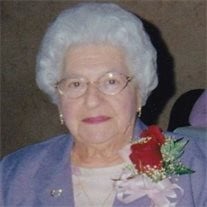 PINELLAS PARK, FL- Gloria M. (Marconi) Stinzianni, 94, formerly of Schenectady, passed away on Saturday, May 28, 2016, surrounded by her loving family. Gloria was born in Manhattan New York, the daughter of the late Edmond and Orelia (Josephine DiCannazzaro) Marconi. Residing in Schenectady most of her life, she attended St. John the Baptist School and furthered her education attending Schenectady's Vocational High School. Gloria located to Pennsylvania (Hazelton and Gilbertsville) in the 1990's, returning to Schenectady in 2005 before relocating to Florida in 2006. Gloria married her beloved husband, Nicholas J. Stinzianni February 4, 1945 at St. Anthony's Church. She was employed by the American Laundry in Schenectady. For many years she was a dedicated homemaker. Returning to work in 1960 as a sales clerk for Wallace Company, she once held the title of "Sales Person of the Month". She retired in 1984 from the General Electric Company where she worked as an office and building cleaner at the Research and Development Center. Gloria was a loving wife, mother, grand and great grandmother and friend. She was devoted to her faith in God. She loved to read, do jigsaw puzzles and enjoyed watching her favorite "story". She will be forever remembered as being kind, thoughtful and caring as well as a wonderful cook and baker. Cooking was her passion, sharing meals with family and friends were her pleasure. Gloria was a parishioner of Sacred Heart Church while residing in Florida. Gloria was predeceased by her husband Nick Stinzianni in 1992; her sister Adele (Carmie) Bies; in-laws Rudolph (Rudy) and Joan Stinzianni, Emilio (Mel) and Betty Stinzianni, Guy and Rose Ricci and many dear friends. She is survived by her loving family, Mrs. Geraldine (Stanley) Rogowicz, of Weeki Wachee FL, Mrs. Maria (Leo) Purvis of Halfmoon, New York, and Mrs. Nancy (Robert) Cervera, of Pinellas Park FL; her grandchildren, Mrs. Lisa (Eric) Hodska, Mrs. Lauren (Robert) Watson; her great grandchildren, Ryan and Kate Hodska, Benjamin and William Watson. Gloria is also survived by several nieces, nephews and friends. A Mass of Christian Burial will be celebrated on Friday, June 3, 2016 at 11am at St. Anthony's Church, 331 Seward Place. Interment will follow in St. John the Baptist Cemetery, Brandywine Avenue. Relatives and friends are invited to call at St. Anthony's Church on Friday, June 3, 2016 from 9 to 11 am . Memorial contributions may be made in Gloria's memory to St. Anthony's Church Memorial Fund, 311 Seward Place Schenectady, NY, 12305.

PINELLAS PARK, FL- Gloria M. (Marconi) Stinzianni, 94, formerly of Schenectady, passed away on Saturday, May 28, 2016, surrounded by her loving family. Gloria was born in Manhattan New York, the daughter of the late Edmond and Orelia (Josephine... View Obituary & Service Information

The family of Gloria M. Stinzianni created this Life Tributes page to make it easy to share your memories.

Send flowers to the Stinzianni family.