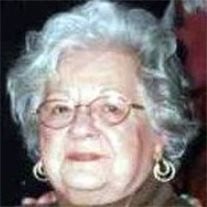 GLORIA DESANTIS With heartfelt sadness, we announce the passing of our mother, Gloria DeSantis 90, of Schenectady on Thursday July 26th at Ellis Hospital. Gloria was born at Ellis Hospital on March 23,1922 to the late Pat Volpicelli and Lena Miranda Volpicelli. She fought a long, courageous battle with deteriorating health issues from the effects of a major stroke in 2008. Gloria was a lifelong Schenectady resident, residing in the Mont Pleasant section of the city for twenty eight years and in Niskayuna for sixty-two years. She attended Schenectady public schools and graduated from Mont Pleasant High School in 1940. Gloria was a "celebrity chef" before we all recognized what that contemporary label meant. She memorized hundreds of recipes and could create a gourmet meal, from appetizer to dessert, in a moments notice. She was also a skilled dress maker who enjoyed creating special event outfits for her friends and relatives. For many years, she would read three or four newspapers a day, beginning with the front page and concluding with the last page, as well as several news magazines. She became an expert on current events, domestic as well as international. She worked off and on for many years at her family's business, Volpicelli's Hygienic Bakery in Mont Pleasant. Gloria was married for thirty-one years to the Pulitzer Prize nominated sports writer and national promoter, Al DeSantis, who passed away in 1991. Gloria was predeceased by her parents as well as her beloved brothers and sisters, Ralph, Angelo, Gemma and Madeline, and a son Patrick Warren. She is survived by her two loving sons, Warren of Wellington, Fl his wife, Karen, Richard of Rock Hill, NY and his wife Kelli; her two grandchildren for whom she had a special love, Darren of Tallahassee, FL and Kristen of Gainesville, FL, Gloria is also survived by several nieces and nephews, and numerous cousins, in addition, her sister-in-law Toni Volpicelli and life long best friend Lil McCann. There will not be any viewing hours. A funeral mass will be celebrated at Blessed Kateri Tekakwitha Church (Formerly St. Helen's Church) 1803 Union Street, Niskayuna at 9am Tuesday, July 31st. Entombment will be at Most Holy Redeemer Cemetery, 2501 Troy Schenectady Road in Niskayuna. Our family extends a special thank you to the nurses and staff at Baptist Health Center in Scotia for the personal care and attention they gave to our mother, during her residence at that facility. We would also like to recognize Dr. Ghimire and the nursing staff on the fifth floor (Samantha, Victoria and Katie) of Ellis Hospital for their caring attention during her final days. In lieu of flowers, contributions may be made to Community Hospice of Schenectady, 1411Union Street, Schenectady, NY 12308 or Baptist Health Systems, Personal Care Fund for Residents, 297 North Ballston Avenue, Scotia, NY 12302.

GLORIA DESANTIS With heartfelt sadness, we announce the passing of our mother, Gloria DeSantis 90, of Schenectady on Thursday July 26th at Ellis Hospital. Gloria was born at Ellis Hospital on March 23,1922 to the late Pat Volpicelli and Lena... View Obituary & Service Information

The family of Gloria DeSantis created this Life Tributes page to make it easy to share your memories.

GLORIA DESANTIS
With heartfelt sadness, we announce the passing...

Send flowers to the DeSantis family.