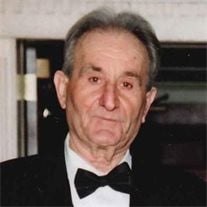 SCHENECTADY – Giuseppe Bianchi, 86, of Avenue B, entered peacefully into eternal rest on Thursday, July 2, 2015 at his home after a brief illness. Giuseppe was born in Fontechiari, province of Frosinone, Italy on September 9, 1928 the son of the late Raffaele and Annunziata Polsinelli Bianchi. He honorably served in the Italian Army. Immigrating to Schenectady on November 22, 1966 with his family, Giuseppe worked for Augie Sciochetti Construction for several years before being employed at General Electric Co, retiring in 1991. He was a master Winemaker, enjoyed fishing, hunting, gardening, and his yearly vacation in Fontechiari. Giuseppe accomplishments during his life time where attributed to his faith in God, strong work ethics, devotion to his children, grandchildren and great-grandchildren. The Bianchi family would like to acknowledge the entire staff at Ellis Hospital Oncology & Radiation; Hospice of Schenectady and especially Dr. John Nolan for their love and concern. Giuseppe is survived by his beloved wife Angela Capoccia Bianchi, whom he married on December 28, 1952; devoted children, Marisa Gismondi and her husband Mario; Jerry Bianchi and his wife Maria, Claudia Ferrera and her husband Mario; Nancy DiCocco and her husband Americo; eight grandchildren, Mark Gismondi (Gina), Nadia Gismondi (Mike Rockwell), Joseph Bianchi, Daniela Bigalli (Bernardo), Monica Ferrera (Lucio), Paola Ferrera (Milvio), Massimo DiCocco (Heather) and Americo DiCocco, Jr.; five great grandchildren Luc LaVigne, Jovani Bianchi, Aviana DiCocco, Mason DiCocco and Landon DiCocco; brother of Pasquale Bianchi and his wife Memmola and the late Rosa Bianchi and Sabatino Bianchi; brother-in-law of Italia Capoccia and Franca Vani and several cousins, nieces and nephews. Services will be held on Monday at 8 am from the Rossi & Ditoro Funeral Home, 501 Union Street (at N. Jay) and then to St John the Evangelist Church, Union Street, where the Mass will be con-celebrated at 9am. Entombment will follow in Most Holy Redeemer Cemetery. Relatives and friends are invited and may call at the Rossi & Ditoro Funeral Home on Sunday from 3 to 6 pm. Memorial contributions may be made in Giuseppe's memory to St Anthony's Church Restoration Fund, 331 Seward Place, Schenectady NY 12305 or Hospice of Schenectady.

SCHENECTADY &#8211; Giuseppe Bianchi, 86, of Avenue B, entered peacefully into eternal rest on Thursday, July 2, 2015 at his home after a brief illness. Giuseppe was born in Fontechiari, province of Frosinone, Italy on September 9, 1928 the... View Obituary & Service Information

The family of Giuseppe Bianchi created this Life Tributes page to make it easy to share your memories.

Send flowers to the Bianchi family.