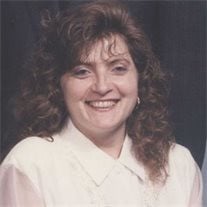 SCHENECTADY – Giovanna D'Elia Augello, 56, entered lovingly into the arms of the Lord on Thursday evening at Ellis Hospital, surrounded by her adoring family. Giovanna was born April 5, 1957 in San Rufo, province of Salerno, Italy a daughter of the late Michael and Marianna Somma D'Elia. She attended Castagneto School in Italy. At age 14 her family immigrated to the United States, settling in Schenectady. She was a 1975 graduate of Linton High School and attended Columbia-Greene Community College. She graduated with honors, earning her AS Degree in Data Processing. She worked at the Academic Support Center of the College for 13 years. Giovanna worked and studied very diligently and was most proud of her accomplishments and achievements. She was predeceased by her parents and many loving family members. Left to mourn her precious memory is her beloved husband, Richard Augello, whom she married on October 7, 1995 in St John the Evangelist Church; her loving and devoted siblings, Vincenzo D'Elia and his wife Mimi, of Rotterdam and Elisabetta D'Elia, of Schenectady. Giovanna was the proud aunt and godmother to her adoring nephew, Michael D'Elia. She was the daughter-in-law of Marion Talbot and the late Frank J. Augello; many aunts, uncles, cousins, brother and sister-in laws; nieces and nephews also survive. Services will be held Monday morning from the Rossi & Ditoro Funeral Home, Union at N. Jay Streets at 9 am and then to St. John the Evangelist Church, Union Street where a Mass will be celebrated at 10am. Entombment will follow in Most Holy Redeemer Cemetery. Relatives and friends are invited and may call at the Rossi & Ditoro Funeral Home, Sunday from 2 to 4 and 6 to 8 pm. Memorial contributions may be made in Giovanna's memory to the Church of St. Joseph, 1820 Route 9, Stuyvesant Falls, NY 12173 or to the Cystic Fibrosis organization to the Boomer Esiason Foundation c/o Etsuko Murase, 483 10th Ave, Suite, 300, New York, NY 10018.

SCHENECTADY &#8211; Giovanna D'Elia Augello, 56, entered lovingly into the arms of the Lord on Thursday evening at Ellis Hospital, surrounded by her adoring family. Giovanna was born April 5, 1957 in San Rufo, province of Salerno, Italy a daughter... View Obituary & Service Information

The family of Giovanna D'Elia Augello created this Life Tributes page to make it easy to share your memories.

Send flowers to the Augello family.