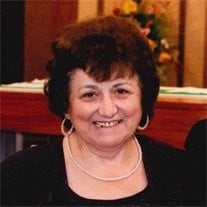 SCHENECTADY – Gina Benacquista Gizzi, 71, passed away peacefully at her home on Friday, December 30, 2016. Gina was born in Fontechiari, Frosinone, Italy on November 23, 1945 a daughter of the late Attilio and Rosa Gizzi Benacquista. She married her husband Natalino on August 12, 1967 and together they immigrated to America in September 1973. Gina worked for Ursula of Switzerland, where she learned the trade of a master seamstress. She was a devoted homemaker, wife, mother and grandmother. She cherished her family very much especially her two grandchildren Michael and Joseph, who were the apple of her eyes. Gina was kind, loving, generous and humble a woman of faith who always put others first. She was a devoted communicant of St. Anthony's Church; part of Sr. Maria Rosa's Kitchen Crew and an annual Feasta worker. The Gizzi Family would like to thank mom's favorite physicians, Dr. Cindy Chan and Dr. Heidi Vanbellingham. We also, want to thank the entire staff of Capital Living for their wonderful care during her rehabilitation for her ankle injury. Gina is survived by her beloved husband of 49 years, Natalino Gizzi; devoted and loving children, Irene (Bob) McQueen, and Marco (Dina) Gizzi; adoring grandsons, Michael McQueen and Joseph McQueen, all of Schenectady; loving sisters and brothers, Pierina Gizzi and Lina Longo, of France; Americo Benacquista and Antonio Benacquista of Italy; many nieces, nephews and dear friends. A Mass of Christian Burial will be celebrated on Friday, January 6, 2017 at 10am at St. Anthony's Church, Seward Place. Entombment will follow in Most Holy Redeemer Cemetery, Niskayuna. In lieu of flowers those wishing may make a memorial contribution to either St. Anthony's Church; American Heart Assoc. 4 Atrium Dr. Albany, NY 12205 or the American Diabetes Assoc, Pine West Plaza, Bldg 2, Washington Ave Ext., Albany, NY 12205.

SCHENECTADY &#8211; Gina Benacquista Gizzi, 71, passed away peacefully at her home on Friday, December 30, 2016. Gina was born in Fontechiari, Frosinone, Italy on November 23, 1945 a daughter of the late Attilio and Rosa Gizzi Benacquista.... View Obituary & Service Information

The family of Gina Benacquista Gizzi created this Life Tributes page to make it easy to share your memories.

Send flowers to the Gizzi family.