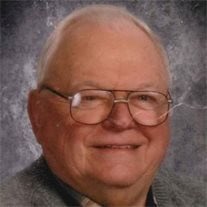 SCHENECTADY – George D. Hebert, Jr., 87, entered peacefully into eternal rest on Thursday, February 12, 2015 at Ellis Hospital. George was born in Schenectady on December 19, 1927 a son of the late George and Mary Mazoway Hebert, Sr. He honorably served in the US Navy during WWII and attended Albany Business College. From 1952 until 2001, George and his wife owned and operated Dambrose Cleaners on VanVranken Avenue. George was a past president and a member of the Northside Business Association, American Legion Post #1092 for over 50 years and a devoted communicant of St. Kateri Tekakwitha Church, Rosa Road. He had strong work ethic, a heart warming smile and was a friend to all. He was predeceased by two grandchildren, Mark Hebert and Kimmy Hebert. George is survived by his beloved wife of 65 years, Dolores Dambrosio Hebert, whom he married on September 25, 1949; devoted children, George D. Hebert, III and his wife Arlene, of Ballston Spa, Mark G. Hebert, of Albany and Mary Grace McDermott and her husband Michael, of Longmont, CO; siblings, Anne Hartschlag, William Hebert and Shirley Thomas, all of FL; six grandchildren, seven great-grandchildren and several nieces, nephews and very dear friends also survive. A Memorial Mass will be celebrated on Tuesday at 9am at St. Kateri Tekakwitha Church, Rosa Road. Contributions may be made in George's memory to St. Jude's Children's Hospital, 501 St. Jude Place, Memphis, TN 38105.

The family of George D. Hebert, Jr. created this Life Tributes page to make it easy to share your memories.

Send flowers to the Hebert, family.