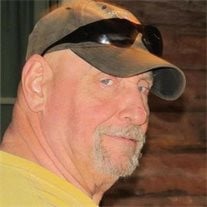 SCHENECTADY – George Gourlay, 64, master licensed plumber, died at Albany Medical Center surrounded by loved ones, following a brief illness, on Tuesday, September 22, 2015. George was born in Scotia and graduated from Scotia-Glenville High School. He was the son of the late George and Louise (DiLornezo) Gourlay. He lived most of his life in Schenectady. In his younger years, George was an Altar Boy at St. Joseph's Church and received the distinguished Eagle Scout Award. George was a big motorcycle enthusiast. He enjoyed riding "Thumper" through the Adirondacks. "Big" as George was so lovingly known as, was an avid hunter and fisherman. One of his biggest pleasures in life was having family, friends and his fellow hunters come to his home, where he would cook and entertain them. His wit and generosity will be greatly missed by everyone who knew him. George is survived by his devoted son, George Gourlay; loving sister, Joyce 'Sadye' Hems and her husband Harold; niece, Christina Dancy and her husband Joe; great niece, Renèe Dancy, great nephews, Justin Dancy and Leon Loubier; great-great niece, Victoria Pierce; and many great friends. A Memorial Mass will be celebrated on Wednesday, September 30, 2015 at 11am at St. John the Evangelist Church, Union Street. Relatives and friends are invited and may call at the Rossi & Ditoro Funeral Home, 501 Union Street, on Tuesday evening from 4 to 7 pm. Memorial contributions may be made in George's memory to the American Cancer Society, 260 Osborne Road, Loudonville, NY , 12211

The family of George G. Gourlay III created this Life Tributes page to make it easy to share your memories.