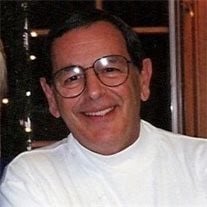 Gary John Neapolitano Saratoga LakeGary John Neapolitano of Saratoga Lake, and a former resident of Schenectady and Niskayuna, NY and Myrtle Beach, SC, died on Thursday, October 25 at Ellis Hospital in Schenectady, after a long illness. The beloved son of Gaetano (Tom) Neapolitano and Amelia (Amy) Pirro, he was born on October 1st, 1942 in the city of Schenectady, NY. Gary graduated from Linton High School and was the president of the class of 1960. He attended both Oneonta State Teachers College and the College of St. Rose. He worked for many years as a special education teacher at Oneida Middle School as well as a laboratory technician at Ellis Hospital. Gary married Norma Hack in 1965, and they lived most of their lives in the Schenectady-Saratoga area, but did spend five years managing several hotels in Myrtle Beach, South Carolina during the 1980s. Gary is survived by his two sons, Matthew James and Darryl Jon Neapolitano, and a grandson, Hunter Neapolitano, all of Saratoga County. He is also survived by his brother, Thomas Joseph Neapolitano and sister-in-law, Becky of Vermont; his sister-in-law, Linda (Hack) Schneider and her husband, Norman of Saratoga Lake; a nephew, David N. Schneider of Jessup, MD; a niece, Christine L. Schneider (Will) Keyser and their children, Ainsley L. and Calli S. Keyser, all of Ashburn, VA, and numerous cousins. All were beloved to him. Gary was predeceased by his wife, Norma; his parents, and his brother-in-law, Ross Alexander Hack. Gary enjoyed life and was an avid chef, wine maker, hunter, musician and entertainer, who loved to spend time with his family and friends. Funeral services will be held on Thursday, November 1st at the Rossi and Ditoro Funeral Home in Schenectady from 4 p.m. to 7 p.m. Burial will be private at a later date. The family would like to thank the staff at Ellis Hospital for their dedicated and fine treatment of Gary during his final days. In lieu of flowers, donations to the Mollie Wilmot Radiation Oncology Center, Saratoga Hospital, 211 Church Street, Saratoga Springs, NY 12866-1003, would be greatly appreciated by Gary, in memory of his wife, Norma. She served as a volunteer in the center and the gifts will be used to help financially distressed patients.

The family of Gary John Neapolitano created this Life Tributes page to make it easy to share your memories.

Send flowers to the Neapolitano family.