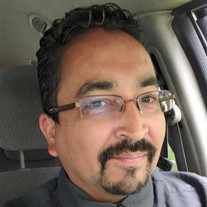 On Friday, March 5th, Gabriel Machin of Glenville, NY, decided that he couldn’t watch Tom Brady win another Super Bowl. He decided instead to meet with God personally, in an attempt to influence the fairness of future games. In all seriousness, Gabe didn’t want to pass. He fought longer and harder than any of us thought humanly possible. He did so, because he valued every single moment with his children. Gabe was born on April 6th, 1975 in San Louis Obispo, CA. He was a member of the Quinault Tribe and took great pride in his heritage. He was an electrician by trade and continued this career until his health began to decline. He begrudgingly left California in 2006 to move to New York with his family. His first three-months in NY were spent cursing at mosquitoes, getting his thumb sliced open by a fresh water piranha, and trying to figure out why everyone in upstate NY gives driving directions according to Stewart’s locations. Two-years later, he would tell you to take a right at the Stewart’s, then veer left at the next one. He could also correctly identify a Pickerel. The only thing Gabe loved nearly as much as his children, was the Raiders Football team. No one had to watch the games to know who was ahead. The decibel level in his home would tell you everything you needed to know. His family is somewhat convinced that his cheering may have contributed to his own hearing loss. The audiological impact on his neighbors has yet to be determined. Gabe’s hobbies included spending time at Galway Lake, bringing the children to the arcade at ViaPort Mall, and running the yellowish-reddish light by the college. We imagine Scotia Police Officers were quite bored when he stopped driving. One of the most remarkable things about Gabe was his willingness to go above and beyond to help others in need. In 2010, he was awarded the bronze Presidential Volunteer Service Award from former President Obama, for his volunteer efforts at Things of My Very Own. The following year, he earned the silver award. In addition to his volunteer efforts, he would grocery shop for individuals with transportation limitations, and welcomed people into his home when they had nowhere else to go. Gabe spent his last six-months on Earth living with his children and their mother in their family home. One would think having to live with your ex would be an act of both comedic and karmatic genius, but the two were close friends. To our surprise, her cooking isn’t what resulted in his passing. Covert orders from Market 32 and Ruggiero’s saved him from that fate. Time with the children was what kept him from fleeing. Gabe was predeceased by his father Ramon Machin and his sister Leah (Machin) Morton. He is survived by his mother Sally (Saux) Machin, his brother Marcos Machin, his children: Meka Boncie-Machin, Keala Boncie-Machin and Ocean Boncie-Machin, and two other children in his family: Geran Boncie-Chickos and Isley Boncie-Dickson, whom he also loved very much. Though Gabe’s clock has run out, we’re going to take his game into overtime. A drop-in memorial service will be held at Rossi & Ditoro Funeral Home on Saturday, March 13th from 1pm-3pm. We are asking those who come by to wear their favorite football gear, silver or black. Gabe would have wanted it that way. Footballs will be checked to ensure they meet the National Football League standards of 12.5-13.5 pounds per square inch. Tom Brady will not be present for obvious reasons. In lieu of flowers and stadium hotdogs, memorial contributions may be made to Things of My Very Own.

On Friday, March 5th, Gabriel Machin of Glenville, NY, decided that he couldn&#8217;t watch Tom Brady win another Super Bowl. He decided instead to meet with God personally, in an attempt to influence the fairness of future games. In all seriousness,... View Obituary & Service Information

The family of Gabriel Machin created this Life Tributes page to make it easy to share your memories.

Send flowers to the Machin family.