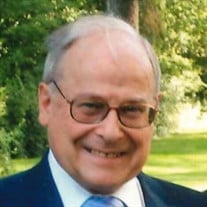 SCHENECTADY – Gabriel B. DiCerbo, 93, entered peacefully into eternal rest on Tuesday, January 19, 2021. Gabriel was born in Schenectady on May 12, 1927, the son of the late Angeline Monzo and Stefano DiCerbo. He attended Schenectady City Schools and graduated from Nott Terrace High School in 1945. He entered the military toward the end of World War II and served in the U.S. Navy. After the war, he attended Union College along with many returning veterans, and graduated in 1950 with a Bachelor of Arts degree in Economics. He worked for the New York State Department of Taxation and Finance for 40 years in various positions as a Tax Technician and Supervisor, retiring in 1991 as Director of Taxpayer Services. Gabriel had a passion for the New York Yankees and Big Band Music of the 40’s. He played tenor sax for the Armand Riccio Moonlight Serenaders in the 40’s and 50’s. He played in the ship’s band aboard the U.S.S. Juneau while in the Navy, performing for concerts and dances whenever the ship was in port in Brooklyn and Guantanamo Bay, Cuba. While at Union College he was a member of the Union College Big Band. He was a devoted family man who enjoyed traveling and loved life. He enjoyed a good laugh, and could come up with a joke at the mention of any subject. He was a member of St. Paul the Apostle Church for many years and most recently St. Anthony’s Church, the Sons of Italy, the Rotterdam Elks, and the American Legion. Gabriel was predeceased by his parents, Steve and Angie DiCerbo and his first wife, Turina Timpano, who passed away on August 25, 1988. He is survived by his wife, Evelyn Parravani Gejay, daughters, Diane (Robert) Flanagan and Catherine (Tim) Hartnett; grandsons, Bobby (Marla) Flanagan and Matthew Flanagan, Sean and Timothy Hartnett; great-grandsons, Robert James and Parker Flanagan; step-children, Edward (Jo-Ann) Gejay, Debra (Mark) Collyer; step-grandsons, Doug (Megan) Gejay, Dan (Brianna) Gejay, Mark Collyer, and Mike (Kaitlyn) Collyer; step-great-grandchildren, Owen and Henley Gejay, Jack Collyer, and Emerson Gejay. A Mass of Christian Burial will be celebrated on Friday at 12 noon at St. Anthony’s Church, 331 Seward Place, Schenectady, NY. Internment beside his late wife, Turina, will be held in St. John the Baptist Cemetery. A celebration of Gabriel’s life will be held at a later time. For those who wish, memorial contributions may be made in Gabriel’s memory to St. Anthony’s Church Restoration Fund or St. Jude’s Children’s Hospital at stjude.org.

SCHENECTADY &#8211; Gabriel B. DiCerbo, 93, entered peacefully into eternal rest on Tuesday, January 19, 2021. Gabriel was born in Schenectady on May 12, 1927, the son of the late Angeline Monzo and Stefano DiCerbo. He attended Schenectady... View Obituary & Service Information

The family of Gabriel Benjamin DiCerbo created this Life Tributes page to make it easy to share your memories.

Send flowers to the DiCerbo family.