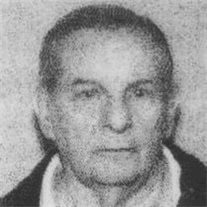 SCHENECTADY – Frederick ‘Pete’ Greenwood, 85, of Frank Street, died Thursday, October 7, at Ellis Hospital, after a long illness. Pete was born in Schenectady, the son of the late Frederick and Willhema Bradt Greenwood. He attended Woestina School. Pete honorably served in the United States Army, 3rd Armored Division, where he was a tank driver in the liberation of Europe. He was a recipient of two purple hearts, a bronze star and a certificate of Valor. Pete fought in six major battles, including the Battle of the Bulge and received two Recommendations from France and Belgium for his valiant duty. After the War, Pete worked for the General Electric Company as a crane operator for 40 years, retiring in 1987. He then served as a Court Officer for Schenectady County Criminal Court for 10 years. Pete was predeceased by his loving son Frederick P. Greenwood and brothers, Gideon ‘Punch’, William and Jerry Greenwood. Survivors include his beloved wife of 64 years, Mary Nocera Greenwood; loving daughter Mary Ann Scott and her husband David, of Lincoln, NE; grandchildren, Frederick P. Greenwood and Craig Appell and his wife Patty; great-grandchildren, Craig, Jr., and Jessica Appell; siblings, Charles and Mona Greenwood, Dorothy DiCresce, Irving ‘Butch’ and Lee Greenwood; several nieces and nephews and great-nieces and nephews. Pete’s family would like to thank the Dialysis Center at the McClellan Campus, the staff at Ellis Hospital and Community Hospice of Schenectady for the wonderful care shown to Pete. Services will be held Monday afternoon at 12 pm at the Rossi & Ditoro Funeral Home, Union at N. Jay Streets. Entombment with Military Honors to follow in Memory Gardens, Colonie. Relatives and friends are invited and may call at the Rossi & Ditoro Funeral Home, Monday morning from 10 to 12 pm Memorial contributions may be made in Pete’s memory to American Cancer Society, 260 Osborne, Loudonville, NY 12211 or to the American Kidney Fund, 6110 Executive Blvd. Rockville, MD 20852. For more information and directions, please visit www.rossiditorofuneralhome.com

The family of Frederick 'Pete' Greenwood created this Life Tributes page to make it easy to share your memories.

Send flowers to the Greenwood family.