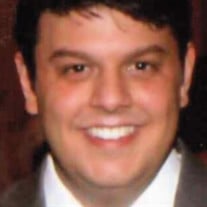 NISKAYUNA – Frank A. LaMalfa, 41, entered into eternal peace on Monday, March 22, 2021 at Ellis Hospital. Frank was born October 16, 1979 a son of Frank and Toni Ann (Visco) LaMalfa. He graduated from Niskayuna High School, class of 1998, excelling as a member of the golf and baseball teams. Frank continued his education at Bentley College, SUNY and SCCC, and worked for several area businesses. Frank was an avid reader, history buff and an encyclopedia of knowledge; usually making him the nightly Jeopardy champ. A lifelong Yankee fan, Frank followed his team’s players and stats with renewed vigor. Frank was a kind, generous and caring soul, who mentored to those who were not as fortunate. He treasured his family and his title as a son, big brother, uncle, nephew, cousin and friend to all. He was predeceased by his grandparents, Fioravante and Valentina LaMalfa and Philip and Mary Visco; uncle and aunt, Robert and Francine Carmichael and a cousin Eric LaMalfa. Frank is survived by those he loved so dearly, his parents, Frank and Toni Ann (Visco) LaMalfa; brothers, Paul M. LaMalfa and Nicholas P. and Sarah LaMalfa; niece and nephews, Gianna, Vincenzo and Dante LaMalfa; aunts and uncles, Fred and Ilene LaMalfa and David and Phyllis Fusco; cousins, Cheryl (Marty) Nolan, John Carmichael, Christina (Josh) Lastarza and their children, Jake and Marissa, Nicole Fusco, Michael (Mikayla Bennett) Fusco and Jake LaMalfa; and many friends. Privately, Frank’s family will celebrate his life, memory and legacy. In lieu of flowers, for those who wish, Memorial contributions may be made in Frank’s memory to Pitch in for Baseball, an organization helping kids in under-resourced areas with baseball and softball equipment, at pifbs.org or 1565 Gehman Rd., Harleysville, PA, 19438.

The family of Frank A. LaMalfa created this Life Tributes page to make it easy to share your memories.

Send flowers to the LaMalfa family.