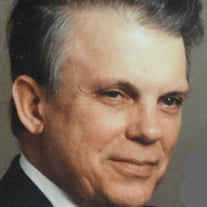 Glenville - Frank L. Blum, Jr. passed away peacefully on June 30,2018. Born in Schenectady on July 10, 1928 to the late Frank and Bertha (Cambage) Blum, Frank was the President of Schenectady Paper Box Co., later re-named SPB Industries. He was a past president of the Society of Packaging and Handling Engineers. He retired at 55 and enjoyed the next 30 years traveling both domestically and internationally, and spending time at home with family and friends. Always social and friendly, he was often seen onstage at Schenectady Light Opera Company productions, organizing trips for the Woestina Young at Hearts, involved with the Rotterdam Junction United Methodist Church, or planning the next trip to Disney World, his favorite destination. Frank was a graduate of Mont Pleasant High School class of 1946 and was on the 50th reunion committee. He had a lifelong interest in musical theater and model railroading, often planning his travel to destinations involving those interests. He always loved barbershop quartet music and never missed a concert by the Schenectady SPBSQSA Chapter. Frank is survived by his wife Dorothy, his children Ellen (Donald) Beaumont of Everett, WA; Kathleen Engel of Burnt Hills; Thomas (Sally) Blum of Rotterdam Junction; and Carol (Joseph) Caracciolo of Burnt Hills. Also survived by Gloria Blum, the mother of his children, as well as grandchildren Derek Beaumont, Cassandra Beaumont, Brian Engel, Evan (Katie) Engel, Joseph (Amanda) Caracciolo, and Jillian (Brody) Savoie and great-grandchildren Roman and Reese Savoie and Logan Engel. Brother William (Barbara) Blum of Scotia also survives; predeceased by a sister, Margery Gene Gilbert. Making children happy was one of Frank’s favorite objectives. Should anyone wish to honor his life, contributions in Frank’s name would be welcome to Make-A-Wish Northeast New York, 3 Washington Square, Albany, NY 12205. A memorial service will be held at a later date.

The family of Frank L. Blum Jr. created this Life Tributes page to make it easy to share your memories.

Send flowers to the Blum family.