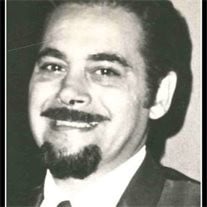 SCHENECTADY - Frank L. Alvarez, 88, passed away suddenly at home on June 12, 2016. He was born in Schenectady, on September 13, 1927, son of the late Baldamero and Jennie DeCelli Alvarez. He was a proud Second Class Seaman in the United States Navy during WWII where he helped to build aircraft carriers in New York City, until he was honorably discharged in 1946. He started his amateur boxing career when he came home and won the Capital District Title for the Golden Gloves in his weight class. He turned pro in 1948, fighting in several matches in Philadelphia and Boston, until getting injured and ending his professional career. He attended Philadelphia Technical Institute and The Wagner School of Art in Boston where he earned degrees in Sign Painting and Commercial Art. He opened up his own sign painting business and was responsible for designing and creating many signs around the capital region for over 40 years. He was one of the founders of The Ring 26 Boxing Association being inducted in the Boxing Hall of Fame in 1988. He was an avid sportsman, having participated in many golf and bowling leagues throughout his life. He also enjoyed acting and was in plays with the Schenectady Light Opera Company and Albany Civic Theater. He is predeceased by his loving wife of 58 years, Helen Hayes Alvarez. Survivors include a sister, Frances Alvarez Shay of Florida; beloved children, David Lee Brewster, Lori Van Nostrand, Annette Pino and Ricardo Alvarez. He was a devoted grandfather to Joann Gigante, Christine Tillman, Michael Pino, Matthew Van Nostrand and pre-deceased by Kaylee Van Nostrand; 12 great-grandchildren and one great-great-grandchild. Services will be held Thursday at 9AM from the Rossi & Ditoro Funeral Home, 501 Union Street and then to St. Anthony's Church, Seward Place, where a Mass will be celebrated at 10AM. Interment to follow at 12:30PM at Saratoga National Cemetery. Relatives and friends are invited and may call at the Rossi & Ditoro Funeral Home Wednesday evening from 4 to 8PM. Those wishing may make a memorial contribution to the Guide Dog Foundation for the Blind online at http://www.guidedog.org,

SCHENECTADY - Frank L. Alvarez, 88, passed away suddenly at home on June 12, 2016. He was born in Schenectady, on September 13, 1927, son of the late Baldamero and Jennie DeCelli Alvarez. He was a proud Second Class Seaman in the United States... View Obituary & Service Information

The family of Frank L. Alvarez created this Life Tributes page to make it easy to share your memories.

Send flowers to the Alvarez family.