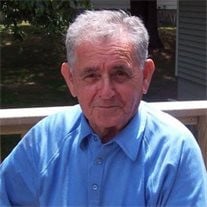 SCHENECTADY – Francesco (Frank) Serafini, 88, was called peacefully into the arms of the Lord Wednesday November 19th. Frank was born August 27, 1926, in Fontechiari, Province of Frosinone, Italy, the son of Angeloantonio Serafini and Filomena Bianchi. After WWII, he made several trips to the United States from Italy, prior to marrying his beloved wife of 60 years Maria DiCarlo on August 16, 1953 in Sora, Italy. In 1954 they immigrated to the United States, making Schenectady their home. Frank began his career working as a mason for his brother Luigi. He later partnered into home building with his brother Michele. The two of them built homes throughout the capital region. Frank ended his career as a machinist with General Electric, retiring to be primary caregiver for his wife. He had a passion for cooking, gardening, and conversation. He was dedicated to his wife and family. Many would agree that he baked the best ciambelle in town, and at one time had the tallest fig tree in Schenectady. Frank was predeceased by his beloved wife, Maria Serafini; his siblings, Domenico and Maria Serafini, Ercole and Filomena DiCocco and Luigi and Angelina Serafini and his mother and father-in-law, Angelo and Cristina DiCarlo. The Serafini family is extremely grateful to the many medical professionals and caregivers who over the past years have given Frank care, comfort and support. He is survived by his children, Patricia Cusano and the late Douglas Cusano, Anthony Serafini and Sandy, Ann Marie Grzywaczewski and her husband Jeff, Joseph Serafini and his wife Christine, and Frank Serafini and his wife Molly; adoring grandchildren, Douglas, Geoffrey, Cristina, and Cara Cusano, Joey Grzywaczewski, Justin, Jordan, Antonio, Kaileigh, and Angelo Serafini; his brother Michele Serafini and his wife Vita, sister-in-law and brother in law, Santina and Felice DiCocco. He is also survived by many nieces, nephews, and godchildren. Services will be held on Monday at 9am from the Rossi & Ditoro Funeral Home, 501 Union St. (at N. Jay) and then to St. John the Evangelist Church, Union Street, where a Mass will be con-celebrated at 10 am. Entombment will follow in Most Holy Redeemer Cemetery, Niskayuna. Relatives and friends are invited and may call at the Rossi & Ditoro Funeral Home Sunday from 2 to 6 pm. Those wishing to memorialize Frank in a special way are asked to; consider making an act of kindness especially during the upcoming holiday seasons or a contribution to a charity of one's choice.

SCHENECTADY &#8211; Francesco (Frank) Serafini, 88, was called peacefully into the arms of the Lord Wednesday November 19th. Frank was born August 27, 1926, in Fontechiari, Province of Frosinone, Italy, the son of Angeloantonio Serafini and... View Obituary & Service Information

The family of Francesco (Frank) Serafini created this Life Tributes page to make it easy to share your memories.

Send flowers to the Serafini family.