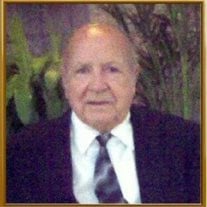 SCHENECTADY- Francesco Cardiello, 81, of Regal Avenue, entered peacefully into eternal life on Monday morning at Ellis Hospital after a long illness. Francesco was born on June 21, 1930 and educated in San Rufo, province of Salerno, Italy, a son of the late Giuseppe Cardiello and Maria Rinaldi. He immigrated to America in 1970 and settled in Schenectady. He worked in the steam turbine department at General Electric, for over 25 years before retiring in 1995. He was devoted to his family, especially his grandchildren; and was an avid gardener. He was a communicant of St. Anthony's Church. He is survived by his beloved wife of 59 years, Teresa D'Elia Cardiello, whom he married September 20, 1952; his loving children, Maria and her husband Felice Salvioli, of Schenectady and Geppino Cardiello and his wife Ruth, of Wilton, CT; devoted grandchildren Giuseppe, Francesco, Daniela and Gianluca Salvioli, Francesco and Maria Teresa Cardiello; a great-grandson Lorenzo Salvioli, several brothers-in-law, sisters-in-law, nieces, nephews. Services will be held on Saturday morning at 8:30am from the Rossi & Ditoro Funeral Home, Union at N. Jay Streets, and then to St. John the Evangelist Church, Union Street, where a Mass will be celebrated at 9:30am. Entombment will follow in Most Holy Redeemer Cemetery, Niskayuna. Relatives and friends are invited and may call at the Rossi & Ditoro Funeral Home, Friday from 4 to 8pm. Memorial contributions may be made in Francesco's memory to the Rubin Dialysis Center Inc, 21 Crossing Blvd., Clifton Park, NY 12065.

The family of Francesco Cardiello created this Life Tributes page to make it easy to share your memories.

Send flowers to the Cardiello family.