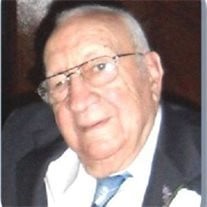 GLENVILLE – Ferdinand Joseph Venditti, Sr., 89, formerly of McDonald Ave, died Sunday morning after a short illness, at home surrounded by his loving family. Fred was born in Schenectady, the son of the late Luciano and Pasqua Benequista Venditti. He left the former Nott Terrace High School early to serve his country in Patton's 3rd Army in the Battle of the Bulge where his battalion liberated Buchenwald Concentration Camp. After W.W. II, Fred and his four brothers owned and operated Venditti Brothers, a sheet metal and roofing subcontracting company, from 1945 until 1990. He was the past president of NYS Sheet Metal, Roofing and HVAC Society and Sheet Metal Workers Local #83. He was also a member of the American Society of Heating and Ventilation Engineers, American Legion Post #21, the Rotterdam Elks and was a former member of Sons of Italy Lodge #321, the Laziale Society and of St. Paul's Church. Fred later received his high school diploma from New York State in honor of his service to his country. Fred was the last survivor of 11 children; he was predeceased by his siblings Dante, Nicholas, Frank, Anthony, Louis, Felix, Lena 'Helen' De Simone, Carmela Del Monico, Antoinette Venditti and Josephine Venditti. Survivors include his beloved wife, Salvatrice 'Kathy' Costanzo Venditti, whom he married on November 10, 1946; loving children, Luciano Venditti and his wife Dorothy of Glenville, Patricia Pone and her husband James of Broadalbin, Dr. Ferdinand Venditti Jr. and his wife Dr. Mary Ellen Ehlers of Loudonville, Mary Jo Malizia of Charlton and Sallie Ann Avery and her husband Timothy of Glenville; 13 grandchildren and 16 great-grandchildren also survive. Services will be held Wednesday at 10am from the Rossi & Ditoro Funeral Home, Union at N. Jay Streets, and then to St. Anthony's Church, Seward Place, where a Mass will be celebrated at 11am. Interment will follow in St. John the Baptist Cemetery. Relatives and Friends are invited and may call at the Rossi & Ditoro Funeral Home, Tuesday from 4 to 8pm. Memorial contributions may be made in Ferdinand's memory to a charity of your choice.

The family of Ferdinand J. 'Fred' Venditti, Sr. created this Life Tributes page to make it easy to share your memories.