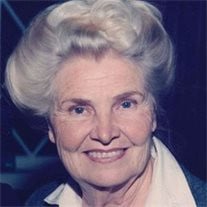 Rotterdam- Evelyn Zemken Masterpole, 91, entered into eternal rest on Monday, June 4, 2018 at Ellis Hospital after a very brief illness. Evelyn was born in Canajoharie on February 17, 1927 a daughter of the late William and Mary Zemken. Her education started in a one room school house and later at Allerton Hospital in Boston where she received a degree as an LPN. Evelyn spent her life being a devoted caregiver, first to her loving family. Outside the home, she cared for patients at Bellevue Maternity Hospital, Ellis Hospital and later for the elderly. She was honored to care for her loving husband Daniel, during his illness from 2004 until his death on November 13, 2010. She was a very kind, generous and meticulous woman devoted her family, community and faith. Evelyn loved relaxing in her garden, as she cared so tenderly for her flowers and plants. She was predeceased by her beloved husband Daniel R. Masterpole, whom she married on October 9, 1946 and eight siblings. Surviving are her loving children, Cheryl Masterpole, of Schenectady and Mark Masterpole and his with Valerie, of Richmond, VT; adoring grandchildren, Crystal Michalak and her husband Andrew, Richard Steele and Paul Steele and his wife Karla; eleven great-grandchildren; many nieces and nephews. A Mass of Christian Burial will be celebrated on Friday at 12:30 at St. John the Evangelist Church, Union St. Interment will be held in Cobblestone Cemetery, Rotterdam. Relatives and friends are invited to call at the Rossi & Ditoro Funeral Home, 501 Union Street on Friday from 10 am until 12 noon. In lieu of flowers memorial contributions may be made in Evelyn's memory to the American Heart Association.

Rotterdam- Evelyn Zemken Masterpole, 91, entered into eternal rest on Monday, June 4, 2018 at Ellis Hospital after a very brief illness. Evelyn was born in Canajoharie on February 17, 1927 a daughter of the late William and Mary Zemken. Her... View Obituary & Service Information

The family of Evelyn Zemken Masterpole created this Life Tributes page to make it easy to share your memories.