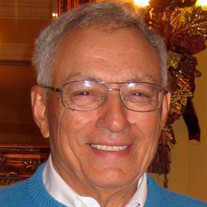 CLEARWATER, FL -Eugene (Gene) Achilles Pacelli, Clearwater, Florida, entered into eternal rest on January 7, 2021 after a long illness. He was born on January 31, 1935 in Schenectady to Nicholas Pacelli and Anna (Ruscitto) Pacelli. Eugene graduated from Nott Terrace High School in 1953 and went to work in the printing business. He then started a career as a Produce Manager for Grand Union where he worked for 35 years. While doing this, he and Katie purchased McCoy’s Liquor store in 1965 and later founded King Cork Wine & Liquor store in 1980. It was opened on Friday the 13 th, but despite that the store had great success and is still open today! This is due to the dedication and stoic work ethic of Gene and Katie, passed along to his son, Tom. Gene was an avid golfer, skier, and swimmer. He was still swimming laps until the last few months! He and Katie also enjoyed traveling. His last big trip was to Italy in 2015 for his 80 th birthday celebration with his sisters and children. He loved the cafes tucked away on the side streets where he would enjoy a carafe of local wine and fabulous food. Gene was a faithful member of the Catholic Church for his entire life; in his final years he was a member of Light of Christ Church in Clearwater, Florida, and St. Anthony’s Church in Schenectady, New York. Eugene is pre-deceased by Katherine Highland Pacelli, his wife of 54 years, his parents, and his two brothers, Arthur and Anthony. He is survived by his sister Mary Ann Sinnenberg, his cousins Mary Lou Guerriero and Robert Guerriero (they were all raised together as siblings) and his three children: Jean Pacelli (Joe Kelley), Roseanne Henley (Jim Henley), and Tom Pacelli (Elisa Pacelli). He is also survived by his 8 grandchildren that loved and looked up to him so much: Benjamin Miller (Amanda), Avery Stone (Hunter), Nicholas Henley (Cara), Stephanie Wesner (Daniel), Daniel Henley (Madeline LaMountain), Robert Pacelli, Shane Pacelli, and Samuel Pacelli. He is also survived by four great grandchildren, Katie Henley, Matthew Henley, Riley Wesner, and Bennett Wesner. Eugene is also survived by several cousins, and his many nieces and nephews who lovingly called him “Uncle Newgene.” He will be missed by all of those who knew him. He touched many lives. There will be a private funeral on January 30 at St. Anthony’s Church. At the family’s request, in response to Covid, the service will be private. For those who wish to attend Eugene’s Mass virtually, it will be streamed live at 11 am at the following link at https://youtu.be/WoAi7_4ajjY In lieu of flowers, contributions may be made in Eugene’s name to Suncoast Hospice, North Pinellas Care Center, 164 West Lake Road, Palm Harbor, Florida, 34684.

The family of Eugene (Gene) Achilles Pacelli created this Life Tributes page to make it easy to share your memories.

Send flowers to the Pacelli family.