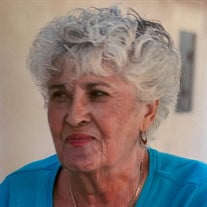 Ersilia Simoni, 87, passed peacefully on February 16, 2021, at the Glendale Home in Scotia New York. Ersilia was a proud immigrant. She was born on August 21, 1933, in San Giovanni Lipioni, in the province of Chieti, Italy. By stagecoach on a very cold and snowy day in 1939 she arrived at the ship, Conte di Savoia bound for the United States. On that liner, while her mother suffered seasickness in the lower reaches of the ship, our beloved mother began her appreciation of finery as the Captain of the ship and many first-class passengers tended to her and included her at their fine dinners. She arrived at Ellis Island on April 6, 1939, at the age of 5. Shortly thereafter in the USA, she tasted her first Italian pizza. On her 21st birthday in 1954, she became a proud citizen of the United States of America. Ersilia graduated from Nott Terrace High School in Schenectady, NY in 1951. She took employment as a secretary at the General Electric Company until her marriage in 1955 to John B. Simoni. Years later she was proud to recall the gifts of both necessities and luxuries she was able to provide her younger sisters and their mother during the years of her employment at GE. In the 1970s our mother expanded her world going back to school at Schenectady Community College and earning the Deans’ list designation. Thereafter and until 1989 she found employment, volunteer opportunities, and personal satisfaction in selling real estate, working for the Alcoholism Council of Schenectady, guiding patrons and watching shows at Proctors Theatre, assisting the Girl Scouts troop, Schenectady County Library, leading discussions at Parents without Partners, and secretarial work at the NYS Dept of Education. In 2000 Ersilia moved to Surprise, Arizona where she thrived in the sun, making new friends easily while continuing to enjoy her lifelong pleasures of preparing beautiful meals and table settings, playing bridge, gardening, and finding new fun with water aerobics and The Red Hat ladies. She returned to Schenectady in 2011 and soon after made a new home in Socha Plaza, Glenville where she resided until she suffered a fall in December 2020. Grandma’s joy came in many forms and many places. There was always music and food, and most of all, family. Listening to the music of the NY Philharmonic, Herb Alpert or Sinatra, bridge parties with the ladies and the bowls of “bridge mix” on the tables, playing Scrabble anytime, anywhere, especially with her brother-in-law Denny Carroll, reading literature and the slightly guilty pleasure of romance novels, cooking with lots of pots and pans and cookbooks or not, preparing her homemade liquors, making Christmas ornaments, writing special notes to loved ones…. Food and Family and the preparation of her home in anticipation of gatherings large or small. Our mother loved to be a home-maker for her family near or far. Ersilia was the 2nd born child of Maria Rossi DiPascual and Claudio Miguel DiPascual. She was predeceased by her parents and three of her siblings, Vincenzo, Immaculata Finnarelli and Michalena Roberts. Left to cherish her memory are her 4 children: Justine (Mullet) Simoni, Louise Gundrum (Darren), John Simoni, Jr. (Brett Beldock) and Vincent Simoni (Tarsha Hite), 6 grandchildren: Marcel Mullet, Spencer Mullet (Danielle), Barret Germain (Maria) and Ian Germain (Kelli), Rebecca Simoni and Johnny Simoni III, and 4 great-grandchildren, the children of Marcel (Avery), Barret (Oscar) and Ian (Owen and Evelie). She is also survived by her sisters Livia Carroll and Ida O’Sullivan (Robert) and her loving nieces and nephews. Also, surviving is her former husband John Simoni. Family and friends will be received from 11:00 -1:00 pm on Saturday, February 20, 2021, at the Rossi and Ditoro Funeral Home, 501 Union Street, Schenectady, NY. There will be a short service at the funeral home led by Rev. Timothy Coombs and Kathy Gorman-Coombs of Trinity Church in Glenville. Burial will follow at St. Anthony’s Cemetery on Glenridge Road, Glenville, NY.

Ersilia Simoni, 87, passed peacefully on February 16, 2021, at the Glendale Home in Scotia New York. Ersilia was a proud immigrant. She was born on August 21, 1933, in San Giovanni Lipioni, in the province of Chieti, Italy. By stagecoach... View Obituary & Service Information

The family of Ersilia Simoni created this Life Tributes page to make it easy to share your memories.

Send flowers to the Simoni family.