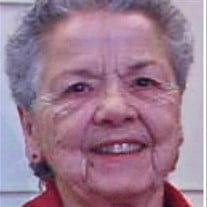 Elizabeth Salamone Suriano, 91, entered peacefully into eternal rest on Thursday, December 12, 2019 at Glendale Nursing Home. Liz was born in Schenectady on December 15, 1927 and was the daughter of the late Matteo and Maria Carmela (Luisi) Salamone. She was a 1947 graduate of Nott Terrace High School and worked for over 20 years at General Electric. Liz was a devoted wife and mother and she formed many long lasting friendships throughout her life. After retiring from the GEshe worked for SODEXHO serving breakfast and lunch at Washington Irving School in Schenectady and after 15 years of service, she retired in 2012. She was an athletic sport enthusiast: in her youth she was a member of the General Electric Women’s Softball team where she was known as “Diamond Liz”. She was a lifeguard at Steinmetz Park where she met and fell in love with her husband, Edward. Liz also liked to bowl and she was a member of the Schenectady Women’s 600 Club. Liz was predeceased by her beloved husband of 54 years, Edward A. Suriano whom she married on June 5, 1949. She was also predeceased by her brothers Antonio and Paul Salamone and sister Philomena Callahan. She is survived by her loving children, Donna E. Frederick and her husband Chris of Hadley, Carol A. Watters and her husband William of Hadley, Edward L. Suriano and his wife Mary of Indio, CA., Linda J. Williams and her husband Scott of Lindenhurst, LI and Richard M. Suriano of Schenectady, ten grandchildren, Jennifer, Matthew, Erica, Sarah, Zachary, Ana, Brian, Jonathan, Samantha and Julieann, and six great-grandchildren – Riley, Owen, Everly, Aubrey, Noor and Ezra.She is also survived by several nieces, nephews, great-nieces, great nephews and many cousins. The family would like to thank Hospice and Glendale Nursing Home, especially the entire staff of Mohawk Trail for their professionalism, compassion and sensitivity to the needs of our mother and her family. We will forever be grateful. Calling hours will be held Friday, December 20th from 3:00pm – 7:00pm at Rossi & Ditoro Funeral Home Union at Jay St. Relatives and friends are welcome to call. Services will be held Saturday morning, December 21 at 10:30 am at Rossi & Ditoro and then to St. Anthony’s Church , Seward Place, where a Mass will be celebrated at 11:30 am. In lieu of flowers, the Suriano family requests that donations be made in Elizabeth’s name to The Community Hospice, 445

Elizabeth Salamone Suriano, 91, entered peacefully into eternal rest on Thursday, December 12, 2019 at Glendale Nursing Home. Liz was born in Schenectady on December 15, 1927 and was the daughter of the late Matteo and Maria Carmela (Luisi)... View Obituary & Service Information

The family of Elizabeth S. Suriano created this Life Tributes page to make it easy to share your memories.

Send flowers to the Suriano family.