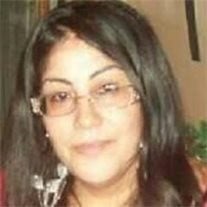 SCHENECTADY – Elizabeth 'Liz' Gonzalez, 48, also known as "Cuchi ", a woman with a heart overflowing with love, and a mother to everyone, died on Sunday, March 5, 2017, surrounded by her loving family. Liz was born and educated in the South Bronx a daughter of Ramon Gonzalez and Teresa Garcia. Locating to Schenectady several years ago, Liz has lived in Schenectady most of her life. She became an active member of the city she called home and began a career as a administrative paraprofessional for the Schenectady City School District. For the past 20 years she has worked at the Schenectady County Jail, Franklin Delano Roosevelt Elementary School, Washington Irving and Oneida Middle School. She also recently began working for Home Instead Senior Care. Liz, a woman of service, always helping her family, colleagues and the students she so tenderly cared for, she always kept a positive attitude, was strong willed and the pillar of her family. Liz was jovial and a giving person always teaching everyone to be positive and had the patience of a saint. She loved all types of music and treasured the times spent with her family and friends. Liz is survived by her loving parents, Ramon (Griselda Gonzalez) Gonzalez and Teresa Garcia, her cherished sons, Antonio S. Bargallo and Salvador Bargallo; step-daughters, Antonia, Isis, Regla and Angie Bargallo; siblings, Blanca, Nick, Daisy, Raymon, Leslie and Nelson Gonzalez, Elizabeth Gonzalez-Mena and Brenda Gabino; several aunts, uncles, special nieces, nephews, cousins and dear friends. A Mass of Christian Burial will be celebrated at 1 pm on Saturday, March 11th at St. Anthony's Church, 331 Seward Place. Burial will be held privately for the family. Relatives and friends are invited to call at the Rossi & Ditoro Funeral Home, 501 Union St., on Friday, March 10th from 3:30 until 8 pm. Memorial contributions may be made in Liz's memory to; Crossroads Center for Children at crossroadcenter.org.

SCHENECTADY &#8211; Elizabeth 'Liz' Gonzalez, 48, also known as "Cuchi ", a woman with a heart overflowing with love, and a mother to everyone, died on Sunday, March 5, 2017, surrounded by her loving family. Liz was born and educated in the... View Obituary & Service Information

The family of Elizabeth Liz "Cuchi" Gonzalez created this Life Tributes page to make it easy to share your memories.