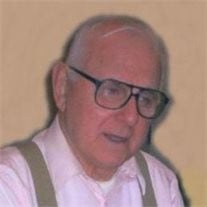 NISKAYUNA – Edward A. Heiserman, 89 entered peacefully into the arms of the Lord on Holy Thursday, March 24, 2016, at Ellis Hospital, surrounded by his loving family. Ed was born in Queens, NY, a son of the late Edward and Frances (Ritter) Heiserman. He was educated in Schenectady and enlisted in the US Army Air Corps. Ed honorably served his country from 1944-1946 during WWII in the Asian Pacific Campaign. Upon returning to the States, Ed, finished his education, graduating from Mt. Pleasant High School and Veteran's Vocational School (HVCC). He began his 35 year career with the General Electric Company, retiring in 1991 as a Foreman in Quality Control, Bldg #273. While enjoying his retirement, Ed volunteered his time and talents to St. Clare's, Ellis and Sunnyview Hospitals; R.I.S.E. Radio at WMHT, commentating the Saturday Morning News named 'The Mom & Dad Show'; ushering at Proctor's Theater for over 25 years, a ham radio operator W2FGF; and a lector at church. Ed was a man of great integrity, dedicating himself unselfishly to his family, country, community and his faith. He was predeceased by his parents and his siblings, Mary Caiazzo, William T. Heiserman and Kathleen Gwynn. Left to cherish his memory is his beloved wife of 65 years, Isabelle 'Connie' Giovannangelo Heiserman, whom he married on May 15, 1949; loving children, Dennis (Major, Ret. USAF) Heiserman, and his wife Harriet, Curtis Heiserman and his wife Janet and Lois Meschino and her husband Joe; adoring grandchildren, Nelly Meschino, Katie Meschino, Christina Sandoval and Michelle Renz; great-grandchildren, Lyta and Hailey; and his beloved furry grand-dog, Sandy. Many nieces, nephews, and friends also survive. Services will be held on Tuesday at 8 am from the Rossi & Ditoro Funeral Home, 501 Union Street and then to St. John the Evangelist Church, where a Mass will be celebrated at 9 am. Entombment with military honors will follow in Most Holy Redeemer Cemetery. Relatives and friends are invited and may call at the Rossi & Ditoro Funeral Home on Monday evening from 5 to 8 pm. In lieu of flowers those wishing to make memorial contributions in Ed's memory are asked to consider; Niskayuna Fire Dept. No.1, 1079 Balltown Road, Niskayuna, NY 12309, St. John the Evangelist Church 806 Union Street, Schenectady, NY 12308, St. Paul the Apostle Church, 2777 Albany Street, Schenectady, NY 12304 or St. Anthony's Church Restoration Fund, 331 Seward Place, Schenectady, NY 12305

NISKAYUNA &#8211; Edward A. Heiserman, 89 entered peacefully into the arms of the Lord on Holy Thursday, March 24, 2016, at Ellis Hospital, surrounded by his loving family. Ed was born in Queens, NY, a son of the late Edward and Frances (Ritter)... View Obituary & Service Information

The family of Edward A. Heiserman created this Life Tributes page to make it easy to share your memories.

NISKAYUNA – Edward A. Heiserman, 89 entered peacefully into the...

Send flowers to the Heiserman family.