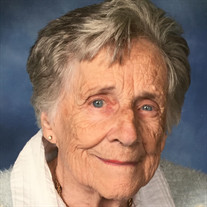 GREER, SC – Dorothy L. Dubanowich, 96, entered into the Arms of the Lord on Saturday, November 17, 2018. Dorothy was born on Christmas Day 1921, in Peru, IN, a daughter of the late Carl and Dot (Zink) Ehlers. She was educated in Perue and attended International Business College, in Ft. Wayne, IN and began her working career with the General Electric. In 1947, Dorothy and her beloved husband Frank, located to Niskayuna, making a home for their growing family. In addition to being a devoted homemaker, Dorothy worked for the Niskayuna School District for 30 years, retiring in 1988. She was predeceased by her husband Frank Dubanowich, in 1977 and a daughter Shirley Dubanowich in 2012. Dorothy is survived by her loving children, Tom Dubanowich and his wife Judy, of Charlton and Beverly Clayton and her husband Robert, of Greer, SC; grandchildren, Kimberly Greene, Jennifer Ventrello, Aaron Clayton, Sean Dubanowich and Trishauna Walsh and twelve great-grandchildren. Services will be held on Monday November 26th at 3 pm at the Rossi & Ditoro Funeral Home, 501 Union Street. Relatives and friends are invited to attend and may call from 2 to 3PM. Interment will be held on Tuesday at 10am in Memory’s Garden. Memorial contributions may be made to the National Kidney Foundation at www.kidney.org

The family of Dorothy Lee Dubanowich created this Life Tributes page to make it easy to share your memories.

Send flowers to the Dubanowich family.