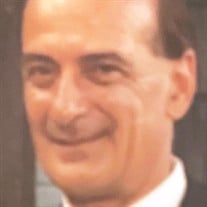 Mariaville Lake – Donald P. Russo, 75, entered peacefully into eternal rest at home on Friday, July 23, 2021, surrounded by his loving family and the peace and tranquility of the lake. Don was born in Newburgh on August 22, 1945, the son of the late Dominick and Ann Amodeo Russo. He was a 1963 graduate of Linton High School and along with classmates, including Pat Riley; Don would plan their high school reunions every five years, which always included an act from Hollywood. He worked in numerous sales positions throughout the years. Don was a member of the Rotterdam Elks Lodge #2157; volunteering in many capacities including House Chairman and in recent years as the wedding coordinator. His sharp wit, wisdom, and humor made Don a natural behind the bar for many years at the Lodge. Don was blessed with a family he adored; faithful friends and his dream of owning a home on Mariaville Lake. He was an avid collector of model cars. He is survived by those he so cherished; his beloved companion Ruth Benacquista; children, Dominick P. (Justina Norero) Russo and Jacquelyn (Charles Peet) Russo; grandchildren, Dominick A. (Molly) Russo, Joseph (Rachel) Russo, Anthony Russo, and Ryan Russo; great-grandchildren, Alivia, Stella, Eva, and Layla Russo; siblings, Peter V. (Kathleen) Russo, Sr. and Carol Ann Abel; his four-legged buddies, Bubba and Bella; several nieces and nephews. Services will be held on Wednesday at 10 am at the Rossi & Ditoro Funeral Home, 501 Union Street. Interment will follow in Park Cemetery, Scotia. Relatives and friends are invited and may call at the Rossi & Ditoro Funeral Home on Tuesday from 4 to 7 pm. Members of the Elk Lodge #2157 are asked to meet at the funeral home at 5:45 pm for a 6 pm service. Memorial contributions may be made in Don’s memory to the Leukemia & Lymphoma Society at lls.org/uny or to the Animal Protective Foundation, at Animalprotective.org.

Mariaville Lake &#8211; Donald P. Russo, 75, entered peacefully into eternal rest at home on Friday, July 23, 2021, surrounded by his loving family and the peace and tranquility of the lake. Don was born in Newburgh on August 22, 1945, the... View Obituary & Service Information

The family of Donald P. Russo created this Life Tributes page to make it easy to share your memories.

Send flowers to the Russo family.