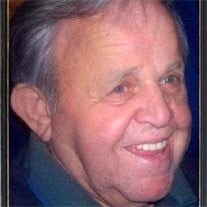 GLENVILLE – Donald R. Moore, Sr. 84, entered into eternal rest on Monday after a brief illness. Don was born in Rochester, the youngest of twelve children to Dominic and Clemtina Buonamo Morinelli, Sr. He relocated with his family to Schenectady in 1943. He joined the United States Army, honorably serving his country during WWII. He was an accomplished drummer and preformed with his band, The Donnie Moore Trio on WPTR Radio. Don worked as a mechanic and then as a carpenter with Local Union 370, retiring after 25 years of service as a master craftsman. He was an avid golfer and a member of the Stanford Golf Club. Don was a communicant of St. Mary's Church in Ballston Spa. Don was a devoted husband and father. His greatest joys were spending time watching his sons, and then his grandchildren at their sporting events. The Moore family is eternally grateful to the staff of Baptist Health and Rehabilitation Center, N3, the Capital District Dialysis Center and the Dialysis Center at Ellis Hospital for all of the care and support over the past two years Don is survived by his beloved wife, Helen A. Rousch Moore whom her married June 23, 1962; devoted sons and their wives, Donald and Annie Moore, of Glenville, Ron and Martina Morinelli, of Tucson, AZ and Dean Moore, of Glenville; adoring grandchildren, Tiffany Moore, Meghan Moore, Tom Moore, Casey Morinelli and Ryan Morinelli; a brother Joseph Morinelli, of Rochester and many nieces and nephews. A Mass will be celebrated on Wednesday evening at 6 pm at St. Anthony's Church, Seward Place. Relatives and friends are invited to attend. Interment will take place in Memory's Garden, Colonie. In lieu of flowers, memorial contributions may be made in Don's memory to Baptist Health, 297 N. Ballston Avenue, Scotia, NY 12302 or Capital District Dialysis Center, 650 McClellan St., Schenectady, NY 12304

GLENVILLE &#8211; Donald R. Moore, Sr. 84, entered into eternal rest on Monday after a brief illness. Don was born in Rochester, the youngest of twelve children to Dominic and Clemtina Buonamo Morinelli, Sr. He relocated with his family to... View Obituary & Service Information

The family of Donald R. Moore, Sr. created this Life Tributes page to make it easy to share your memories.

Send flowers to the Moore, family.