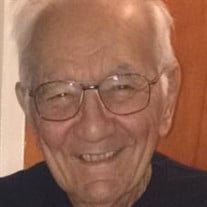 SCHENECTADY – Donald Mennillo, Sr. 84, entered into eternal peace on Saturday at Ellis Hospital after a brief illness. Don was born on December 31, 1934 a son of the late Nicholas and Mary (Dagostino) Mennillo. He was a 1953 graduate of Nott Terrace High School. Don was a self taught journeyman electrician; he worked for Justin Electrical, retiring at the age of 62. He was a member of the International Brotherhood of Electrical Workers #236. A man of integrity, Don relished life and was the epitome of a happy man; happiest was the time he spent with his family, especially his grandchildren; doting on them, supporting them in their endeavors and treasuring their accomplishments. Don was a founding member of the Mohawk Valley Golf League; he bowled with the Mohawk Valley Bowling League; and the Schenectady and Sportsman’s Majors. Don was honored as an inductee into the Schenectady Bowling Association’s Hall of Fame in 2011. He was a communicant of St. Anthony’s Church. Don was predeceased by his siblings, Stephen Mennillo, Carmella “Midge” Weekes, David and Edward Mennillo. Don’s legacy lives on through his beloved wife of 55 years, Mary (Catapano) Mennillo; devoted sons, Gary (Shelly Housel) Leva, Anthony (Diane) Leva; Donald Mennillo, Jr., loving grandchildren, Angela Leva, Justin Leva, Ashley Mennillo, Anthony J. Leva and Sarah Garling; great granddaughter, Shannon Rush and great-great-granddaughter, Charlotte Liberatore; special nieces and nephews; and a life’s worth of friends. A Mass of Christian Burial will be celebrated on Thursday at 10am at St. Anthony’s Church, Seward Place. Interment will follow in St. John the Baptist Cemetery. Relatives and friends are invited and may call at the Rossi & Ditoro Funeral Home on Wednesday from 3 to 7 pm. Memorial contributions may be made in Don’s memory to St. Anthony’s Church Restoration Fund.

SCHENECTADY &#8211; Donald Mennillo, Sr. 84, entered into eternal peace on Saturday at Ellis Hospital after a brief illness. Don was born on December 31, 1934 a son of the late Nicholas and Mary (Dagostino) Mennillo. He was a 1953 graduate... View Obituary & Service Information

The family of Donald Mennillo Sr. created this Life Tributes page to make it easy to share your memories.

Send flowers to the Mennillo family.