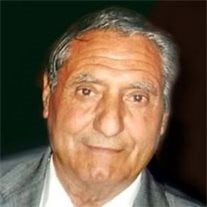 Domenico Fazzone died from complications from Parkinson's disease on March 10, 2017, in Austin, Texas at age 83. He is survived by his wife of 61 years, Maria, and his three children, Peter (wife Mary), Joseph (wife Tracy), and Maryann (husband Paul), his 8 grandchildren, 1 great grandchild and his brother, Louis (wife Antonietta) and sister, Genoveffa, of Schenectady, NY, and sister, Filomena, of Rome, Italy. He is preceded in death by his parents, Pietro and Fenisia, brothers, Antonio, Severino and Giuseppe, and sister, Carmela, all from Italy. He was born near the city of Caiazzo in southern Italy on June 12, 1933, the sixth of eight children of Pietro Fazzone and Fenisia Ponsillo. With only a third grade education and a determination to succeed, he began his improbable and amazing life's journey. After living through the hardships of World War II, he left Italy to work in Switzerland at age 17 as a farm hand and later a construction laborer. At age 21, he immigrated to the United States in search of opportunity. Upon arrival, he was detained at Ellis Island for several days before traveling to Schenectady, New York. He was joined weeks later by his 2 younger siblings Genoveffa, and Louis. In 1955, he traveled back to Italy to marry his sweetheart Maria, and they returned to Schenectady. He began work as a mason and in 1957 he started his own business, Fazzone Construction Company. His company completed numerous projects and steadily grew to be a well-respected general contracting firm in upstate New York. He moved his family and company to Austin, Texas, in 1976, in search of greater opportunities and a warmer climate. He also started another company, Southwest Monument and Sign in 1985 to compliment his existing construction business and to survive a real estate crash which greatly affected the construction industry for several years. Both Fazzone Construction and Southwest Monument continue to grow and thrive in Austin and San Antonio under the guidance of his son Joseph. He was a devoted and loving husband, father, grandparent, and a loyal and trustworthy friend. He pursued everything he did with passion and enthusiasm. He believed anything was possible and he enjoyed sharing this optimism with all who knew him. He had a genuine interest in people and made a friend in everyone he met, engaging in conversation and sharing life experiences. His other interests included traveling, hunting, and his garden of various vegetables, fruits, and nuts that he loved from his early childhood. At age 80, he planted and cultivated a 6 acre olive orchard and wine grape vineyard. He was an avid and skillful hunter who traveled to Colorado every year for the past 35 years to pursue his favorite passion, deer and elk hunting. While living in NY, he hunted every season for 20 years with his beloved brother and close friends. Services will be held on Thursday at 10 am from the Rossi & Ditoro Funeral Home, 501 Union St. followed by a Mass of Christian Burial at St. Anthony's Church, Seward Place, at 11am. Entombment will follow in Most Holy Redeemer Cemetery. Relatives and friends are invited to call at the Rossi & Ditoro Funeral Home on Wednesday from 4 to 7 pm. In lieu of flowers, donations in memory can be made to The Michael J. Fox Foundation for Parkinson's Research at www.michaeljfox.org.

Domenico Fazzone died from complications from Parkinson's disease on March 10, 2017, in Austin, Texas at age 83. He is survived by his wife of 61 years, Maria, and his three children, Peter (wife Mary), Joseph (wife Tracy), and Maryann (husband... View Obituary & Service Information

The family of Domenico Fazzone created this Life Tributes page to make it easy to share your memories.

Send flowers to the Fazzone family.