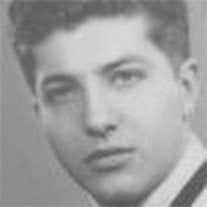 SCHENECTADY – David L. Reali, 81, entered into eternal peace on Tuesday at his residence, with his loving family at his side. David was born in Schenectady on August 12, 1930, a son of the late Edward and Vincenza Pannicia Reali. David attended St. Joseph's Academy and graduated at the age of 15. He received his Bachelors of Science degree in physics at 19 from Siena College. After honorably serving his country in the United States Army and then as Reservist, he continued his education, receiving his Masters Degree in Metallurgical Engineering from RPI. He began his long dedicated career by working at ALCO until 1968 and then for KAPL until his retirement in 1995. David dedicated himself to his family and faith, his work and community. He was the president of the Diocesan Council in the 1980's and 90's. He was an avid Red Sox and Celtic's fan and a member of the American Metallurgical Society, and a devoted communicant of St. Anthony's Church. David was predeceased in death by his parents, infant son Christopher, and his sister, Ann Reali. He is survived by his beloved wife of 58 years, Julie Dignon Reali whom he married August 22, 1953; his loving children, David A. Reali, of Rensselaer, Eileen Ottery (Andrew Giaquinto), of Clifton Park, Amy Stater, of Burnt Hills, Betsy Reali (Randy Ross), of Florida, MA, Paul (Eleanor) Reali, of Charlotte, NC and Joel Reali, of Glenville; siblings, Lillian Pivacek, of Danvers, MA and Louis (Kathryn) Reali, of Rochester; ten grandchildren, a great granddaughter, many nieces and nephews. A Mass of Christian Burial will be celebrated on Saturday at 11 am at St. Anthony's Church, 331 Seward Place. Relatives and friends are invited to attend. Interment will be held at a later date in St. Anthony's Cemetery. In lieu of flowers memorial contributions may be made in David's memory to St. Anthony's Church.

SCHENECTADY &#8211; David L. Reali, 81, entered into eternal peace on Tuesday at his residence, with his loving family at his side. David was born in Schenectady on August 12, 1930, a son of the late Edward and Vincenza Pannicia Reali. David... View Obituary & Service Information

The family of David L. Reali created this Life Tributes page to make it easy to share your memories.

Send flowers to the Reali family.