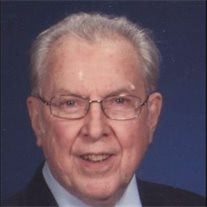 SCHENECTADY – Charles W. Hendrickson, Jr., 84, entered into eternal peace on Friday at his home, beside his loving wife. Chuck was born in Binghamton, NY on June 29, 1929, the son of the late Charles and Jessie Bailey Hendrickson. He was a 1947 graduate of Binghamton North High School and Broome County Technical College, receiving his Associates Degree in Chemistry in 1949, and began his long and committed career with the General Electric Company. Chuck enlisted in the US Air Force, and honorably served his Country from 1951 until 1955. Chuck continued working with the General Electric Company at KAPL in Niskayuna, retiring in 1989, after 40 years of service, during his tenure with the GE, he attended and graduated in 1963 from RPI, in Troy, with a Bachelors of Science Degree in Mechanical Engineering. Chuck was the epitome of a gentleman, he was devoted to his family, friends and his faith. Chuck loyally served his church community, he was among the first laypersons to attend Formation for Ministry training; he served many years as an Eucharist Minister and Lector; Chuck taught religious education and was sponsor for RCIA and volunteered his time on the finance committee and the annual festa. He was a life member of the Holy Name Society and the American Legion. He was a member of the GE Quarter Century Club and enjoyed countless hours with his buddies on the KAPL golf league. Helen and Mary are eternally grateful to Maggie Martin, Aggie Durkin, and to the staff and volunteers of Community Hospice. Their dedication, care and compassion enabled Chuck to stay in the comfort of his home. Chuck was predeceased by his parents and both of his sisters at the age of two, Doris L and Alma Marie Hendrickson. He is survived by his beloved wife of 57 years, Helen Caracciolo Hendrickson; his loving daughter, Mary Hendrickson, of Saratoga Springs; his sister-in-law, Mary Jo Zizzi, of Utica; devoted nieces, Barbara Ranucci (Frank), Mary Lou Jones, Ann Marie Comis (Michael), Rosemary Galime (Eugene) and Ellen Karwacki (Joseph). Services will be held Monday at 10 am from the Rossi & Ditoro Funeral Home, Union at N. Jay Streets, and then to St. Anthony's Church, Seward Place, where a Mass will be celebrated at 11 am. Entombment will follow in Most Holy Redeemer Cemetery. Relatives and Friends are invited and may call at the Rossi & Ditoro Funeral Home, Sunday afternoon from 2 to 5 pm. Memorial Contributions may be made in Chuck's memory to St. Anthony's Memorial Fund or St. Anthony's Food Pantry, 331 Seward Place, Schenectady, NY 12305 or to Community Hospice, 1411 Union Street, Schenectady, NY 12308.

SCHENECTADY &#8211; Charles W. Hendrickson, Jr., 84, entered into eternal peace on Friday at his home, beside his loving wife. Chuck was born in Binghamton, NY on June 29, 1929, the son of the late Charles and Jessie Bailey Hendrickson. He... View Obituary & Service Information

The family of Charles W. Hendrickson, Jr. created this Life Tributes page to make it easy to share your memories.