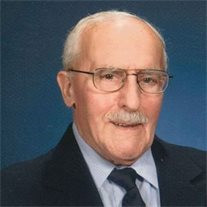 SCOTIA- Cesare A. Bucci, 93, entered peacefully into eternal rest on Tuesday, January 16, 2018 after a long battle with Alzheimer Disease. Cesare was born in1924 in Schenectady, son of the late Joseph and Antoinette Castelli Bucci. He was a graduate of Nott Terrace High School and he graduated from Union College in 1951 with a degree in Electrical Engineering. Cesare enlisted in the US Army and served in the Occupation Army in Japan. He worked for the General Electric Company, large steam turbine generator department, retiring in 1983. He was a member of the Italian Community Center Charitable Foundation in Troy and a devoted communicant of St. Anthony's Church. Through St Anthony's Church over the years Cesare helped serve meals at the City Mission of Schenectady. Cesare was a volunteer with the AARP Foundation Tax Aide program for over 20 years at the Glenville Senior Center. He also volunteered as a tutor in the homework club program at Glen Worden School for many years. Cesare was predeceased by his sister, Theresa V. Bucci. He is survived by his beloved wife of 65 years, Blanche I Carbonneau Bucci; loving children, Joseph A. (Meg) Bucci, Ann M. (John) Frigolette and Denise T. (Kenneth) Troiano; grandchildren, Jennifer Frigolette, Christine (Bill) Bucci Capozzi, Daniel Frigolette, Anthony Bucci, Marie (Rob) Frigolette Stott, Michelle Troiano, Joseph Frigolette and Brian Troiano ; great-grandchildren, Luca, Giuliana, Olivia and Carson; brother, Eugene J. (Ann) Bucci; many nieces, nephews and cousins. Services will be held on Wednesday, January 24, 2018 at 10 am from the Rossi & Ditoro Funeral Home, 501 Union St., and then to St. Anthony's Church, Seward Place, where a Mass will be celebrated at 11 am. Interment will be held in St. Anthony's Cemetery. Relatives and friends are invited and may call at the Rossi & Ditoro Funeral Home on Tuesday, January 23, 2018 from 3 to 7pm. The family deeply appreciates the care and concern given by the staff at Mohawk Trails and the activities department at the Glendale Home. The family also greatly appreciates the care given by the staff at Beacon Pointe. In lieu of flowers, memorial contributions may be made in Cesare's memory to St. Anthony's Church Food Pantry, 331 Seward Place, Schenectady, NY 12305; Schenectady City Mission, 425 Hamilton Street Schenectady NY 12305; or the Alzheimer's Association, 4 Pine West Plaza, Suite 405, Albany, NY 12205.

SCOTIA- Cesare A. Bucci, 93, entered peacefully into eternal rest on Tuesday, January 16, 2018 after a long battle with Alzheimer Disease. Cesare was born in1924 in Schenectady, son of the late Joseph and Antoinette Castelli Bucci. He was... View Obituary & Service Information

The family of Cesare A Bucci created this Life Tributes page to make it easy to share your memories.

Send flowers to the Bucci family.