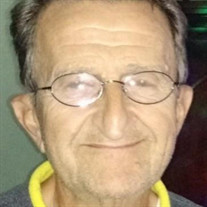 HOBE SOUND, FL - Carmen M. Cusano, Ph.D. 86, died Monday, December 21, 2020 at 3:53 p.m. at Martin South Hospital in Hobe Sound, FL, of natural causes. Carmen was born in Schenectady on September 2, 1934, son of the late Charles and Adeline Coppola Cusano. He was educated in Schenectady and graduated Valedictorian of St. Joseph's Academy in 1951. He earned his B.S. from Union College in 1955 and his Ph.D. in organic chemistry from Rensselaer Polytechnic Institute in Troy, NY in 1961. Carmen worked for General Motors in Detroit, MI before moving to Poughkeepsie, NY where he worked for Texaco Co. as a chemist and group leader for over 25 years. He was recruited by Cummins Engine Co. in 1988 and after leaving Cummins, created CMC Consulting Inc. which he ran until retiring to Florida in 1998. His contributions to the field of organic chemistry include over 50 patents in the area of oil additives. Carmen was devoted to his tennis and ski groups in Florida and over the years was an avid ballroom dancer, sailor, gardener, and wildlife enthusiast. He is survived by his wife of nearly 60 years Molly Martinez Cusano, R.N.; his two loving children, Janice Cusano, Ph.D. of Roanoke, VA, David Cusano, Ph.D. (Laurie) of Jupiter, FL, two grandsons David A. and Michael A. Cusano; two nephews Chuckie (Katie) of Providence and their son Charles, and Roger (Margaret) of Rotterdam. He was preceded by his brother John Cusano (Phyllis) in 2007. Services were held in Hobe Sound this past Saturday, January 2 at St. Christopher's Catholic Church.

The family of Carmen M. Cusano Ph.D. created this Life Tributes page to make it easy to share your memories.

Send flowers to the Cusano family.