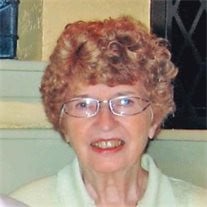 GLENVILLE – Bette A. Helms, 82, passed away on Monday, December 28, 2015. Bette was born in Schenectady on March 24, 1933 the daughter of the late Jack and Margaret (Norman) Harrison. She graduated in 1950 from Scotia High School and attended Schenectady County Community College. Bette worked at First National Bank of Scotia and later in the Trust Division of Schenectady Trust. Bette was an amazing woman who overcame many challenges during her lifetime. She was highly intelligent, caring and a generous spirited woman, dedicating herself to her family, friends and community. She will be greatly missed. Bette was predeceased by her beloved husband of 45 years, Frederick Helms; a granddaughter, Caitlin Helms and her brother, Dick 'Mickey' Harrison. She is survived by her loving children, Stacy (Bert) Wilson, of Charlton, Karen (Jim Resue) Helms, of Scotia, Michael (Nancy) Helms, of Rancho Cucamonga, CA and Douglas (Christine) Helms, of Chattanooga, TN; a grandson, Jack Geske; her loyal doggie companion, Cookie; a niece and a nephew. Services will be held on Sunday, January 3, 2016 at 3 pm at the Rossi & Ditoro Funeral Home, 501 Union Street, Schenectady. Relatives and friends are invited and may call at the Rossi & Ditoro Funeral Home on Sunday from 1 pm until the service. Those wishing to make a memorial contribution in Bette's memory may do so to the Animal Protective Foundation, 53 Maple Avenue, Scotia, NY 12302.

The family of Bette A. Helms created this Life Tributes page to make it easy to share your memories.

Send flowers to the Helms family.