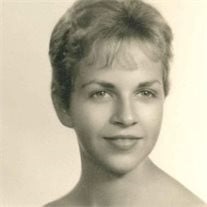 Barbara Mulford, age 73, passed away in peace and tranquility on July 5, 2014 in the loving care of her children and family at her daughter's home in Niskayuna, NY. Born in the Bronx, NY, Barbara spent much of her youth cavorting in the quaint seaside town of East Norwalk, Ct.. An adventurous soul from her genesis, Barb spent much of her early days waterskiing and fishing with her brother and friends in the Long Island Sound and befriending elderly neighbors who would make her their dinner guest of honor in the evenings. Her fondest high school memories were spent at the Shattuck-St. Mary's Academy in Faribault, Minnesota where "Bobby" excelled in academics, horseback riding and all social activities. After attending Ladycliff College in Highland Falls, NY for two years, she married Andrew Borger and had three children, losing her first-born son Erik at the tender age of five to leukemia. When her first marriage ended in divorce, Barb raised her two children, Christian and Kirsten as a single mother, supporting her family in a remote area of the Adirondacks where they lived for a stint in a rustic cabin with no running water. They were poor in currency but incomparably rich in experience. It would be a bonding era for the trio. Barb excelled at many interesting careers over the years, including but not limited to jobs as a newspaper columnist, editor, advertising sales manager, insurance agent and financial planner. She exuded confidence and with good reason: She was really good at nearly everything she did. At age 35, Barb took up the great American instrument, the banjo, and practiced until her fingers blistered and bled. As a result of her diligence and newfound passion for bluegrass music, Barb soon became one of the preeminent female banjo players in the country, honing her craft at festivals and jubilant jams that would often last until sunrise. Her ship came into port when she met the love of her life, Claude Mulford, through their mutual love of bluegrass music. She was destined to marry Claude in 1991, after reflexively snagging an overzealously tossed bridal bouquet at her son's wedding that appeared doomed for the floor (she did so while seated and eating cake). One could call it the "immaculate reception". Claude learned to play guitar and the two were literally picking and grinning together for the rest of their marriage until Claude's death in 2008. Their musical harmony would become a metaphor for their lives together. Barb and Claude cruised the country, visiting remote corners of 42 states while living in their RV for two years. They decided to make Orange City, Florida their home base, a place where Barb remained for 17 years. In contrast to many retirees whose RV sits idle in the driveway after one big trip, Barb and Claude continued to travel frequently in it over the years, visiting friends and family and of course, playing music. They also spanned the globe together, delighting in desserts in France, amazing in dance with Aborigines in Australia, and barraging breathtaking mountain passes in New Zealand in an RV. After Claude's death, Barb moved to Latham, NY, happily residing in Hearthstone Village amongst her new gal pals for nearly three years before stricken by the blood cancer CMML. She immensely enjoyed her time spent with her nearby family. After being hospitalized for a brief period of time, Barb spent her final days in the warm hands and awaiting arms of her loved ones in her daughter Kirsten's home, dying with the peace, dignity and humanity that the end of life warrants. May God bless and heal her weary soul. She will always be remembered for her "Esprit de Coeur", the spirit of heart that was unique to her passionate life on Earth. Barbara was predeceased by her late husband Claude Mulford after 17 years of marriage. She is survived by her son Christian Borger and wife Jean of Niskayuna, NY, her daughter Kirsten Borger and husband David Lambarski of Niskayuna, her grandchildren Christian, Peter, Dane, Anders, Soren and her cousin Nina Wilder of Deland, FLA. A memorial service will be held on Wednesday, July 9 at the Rossi Ditoro Funeral Home on 501 Union St., Schenectady. Calling hours will be from 12:30 to 2:00, with a service held from 2:00 to 2:30. In lieu of flowers, the family has requested donations in memory of Barbara Mulford to be made to the Leukemia and Lymphoma Society at donate.lls.org

Barbara Mulford, age 73, passed away in peace and tranquility on July 5, 2014 in the loving care of her children and family at her daughter's home in Niskayuna, NY. Born in the Bronx, NY, Barbara spent much of her youth cavorting in the quaint... View Obituary & Service Information

The family of Barbara Mulford created this Life Tributes page to make it easy to share your memories.

Barbara Mulford, age 73, passed away in peace and tranquility...

Send flowers to the Mulford family.