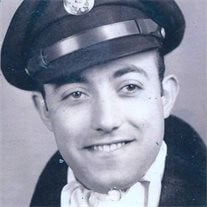 SCOTIA – August M. Caschera, 94, entered peacefully into eternal rest on Tuesday, February 24, 2015 at Ellis Hospital. Augie was born in Schenectady on August 17, 1920 the youngest son of the late Michael and Mary Caschera. He graduated from Nott Terrace High School, where he excelled in track, bowling and golf. In 1937 he won the Edison Club Caddy Championship. Augie honorably served in the Army Air Force from 1942 to 1946. After the war he started AMC Window Cleaning and Floor Service, working until most recently. He was an avid golfer, enjoyed fishing in Vermont, woodworking, gardening and vacationing in Cape May and Wildwood. Augie enjoyed life most, when he was helping others and spending time with his nine grandchildren. Augie is survived by his beloved wife Ann Paone Caschera, whom he married on December 25, 1953; devoted children, James Caschera, and his wife Lynn, of Schenectady and Mary Zimbler and her husband Donald, of Deansboro, NY; nine grandchildren; brother-in-law, Victor Paone, of FL and numerous cousins, nieces and nephews. Services will be held on Friday, at 11:30 am at the Rossi & Ditoro Funeral Home, 501 Union Street (at N. Jay) with Fr. Richard A. Carlino, officiating. Interment will follow in St. John the Baptist Cemetery. Relatives and friends are invited and may call at the Rossi & Ditoro Funeral Home on Thursday from 4 to 7 pm Memorial contributions may be made in Augie's memory to Beukendaal Fire Department, 501 Sacandaga Road, Scotia, NY 12302.

The family of August M. Caschera created this Life Tributes page to make it easy to share your memories.