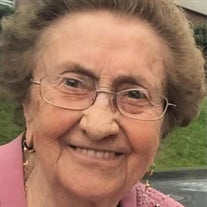 SCHENECTADY - Antonia (Antonetta) DiCocco Carpico was born on January 23rd,1925 in the beautiful hilltown of Fontechiari, near central Italy. She married Angelo Onorio Carpico from a nearby hilltown (predeceased). She worked very hard managing her family's farm in Italy after her mother (Palma Pallante DiCocco), father (Lorenzo Dicocco), sister (Marianne), and brother (Michael) emigrated to the USA. These were difficult times during WW2 and she had many stories about how they scraped by to make due, with bomber planes flying overhead every day, and her secret plan of how to escape out the back window when the enemies came to her house. By 1955 she was finally able to join her family, traveling with her 5 year old son, Lorenzo. It was a long voyage on the Christopher Columbus from Naples to the port of NY. It wasn’t until 1959 that her husband, Onorio was able to join her. Antonia’s dedication to family was reflected in her loving care of them. Her other passions were cooking and gardening. She, along with her husband, grew all their own produce. Her small flat on Avenue A in Goose Hill always smelled of fresh sauce. The family welcomed everyone, and were very insulted if you didn't stay to eat. While maintaining a household, Antonia also held down several full time jobs in Schenectady. On Valentine’s Day 1966, Antonia and Onorio welcomed their second son, Angelo Anthony (Tony). He became the new center of their universe. The two boys were constantly arguing over who mom liked best. Also included in Antonia’s family are Lorenzo’s wife (Theresa Lilla), Tony’s wife (Nancy Ann), grandchildren, Christian Carpico (KC), Tessa Steller (Jordan), Breanna Carpico, and Alyssa Salamone, great grandchildren, Drew, Ryan and Caiden Carpico, and Evan, Talia, and Lilla Steller. Antonia is also survived by her sister Marianne Pallotolo (Carmen, deceased), Michael DiCocco (Carol), and numerous nieces, nephews, cousins, and good friends. Antonia was a beautiful, generous, humble soul. She was famous for her long good-bye waves followed by “I love everybody”. She passed peacefully in her sleep on April 1, 2022. She will be greatly missed. Services will be held on Wednesday, April 13th at 10 am from the Rossi & Ditoro Funeral Home, 501 Union Street, followed by a Mass of Christian Burial at 11 am at St. Anthony’s Church, Seward Place. Entombment will follow in St Anthony’s Cemetery. Relatives and friends are invited and may call at the Rossi & Ditoro Funeral on Tuesday, April 12th from 5-7 pm. It is requested that everyone in attendance for all services wear masks and follow social distancing. Memorial Contributions may be made in Antonia’s memory to St. Anthony’s Church.

The family of Antonia Carpico created this Life Tributes page to make it easy to share your memories.

Send flowers to the Carpico family.