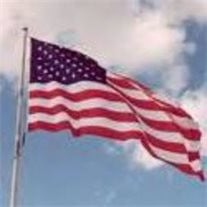 SCHENTCTADY- Antoinette M. "Ginger" Wilson, 84, entered into eternal rest on Friday, February 8, 2013. Ginger was born in South Schenectady, the daughter of the late Anthony and Onesta DeBartomeo Brandolino. She attended Jefferson School and Draper High School. She worked many years as a matron for the Schenectady School System. She was a life time member of the V.F.W 357 Auxiliary, holding many Auxiliary offices as well as District, and State V.F.W. Auxiliary Official. She was also a member of the American Legion Post 21, and a former member of the Purple Heart Auxiliary and numerous other veteran auxiliaries. Ginger was predeceased by her brothers, Thomas, Peter and John Brandolino. She is survived by beloved husband of 40 years, who she married on May 26, 1972, James A. Wilson; her loving children, Robert Wilson and his wife Kim, of Schenectady, Sharon Fazio and her husband Joseph, of Myrtle Beach, SC, Denise Kopacz, and her husband Joseph, of Sloansville, and Mark Wilson and his wife Cheryl, of Port Charlotte, FL; siblings, Sabatine Brandoline, of Duanesburg, Daniel Brandolino, of Rotterdam, Anthony Brandolino and his wife Shirley, of Burlington, VT; 13 grandchildren and 11 great-grandchildren and two great-great grandchildren. A memorial and burial services will be held at a later date. In lieu of flowers memorial contributions may be make in Ginger's memory to Saratoga National Cemetery Honor Guard Association, 200 Duell Road, Schuylerville, NY 12871.

The family of Antoinette Ginger Wilson created this Life Tributes page to make it easy to share your memories.

Send flowers to the Wilson family.