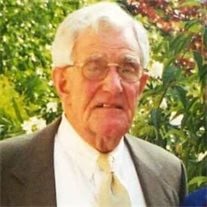 ST. AUGUSTINE, FL – Anthony A. Riccio, 91, formerly of Schenectady, entered into eternal peace on Thursday, February 11, 2016 at the Baptist Medical Center South, after a brief illness. Tony was born in Schenectady, a son of the late Angelo and Margherite Petrazzuoli Riccio. He was a graduate of Schenectady Vocational High School and attended Russell Sage College, where he earned his accounting certificate. He worked as an accountant for ALCO Products and General Electric, as manager of Plant and Equipment Accounting for all Turbine Operations, which is now referred to as Power Systems. Tony was a man of integrity, wisdom, and devout faith. He shared his many God given talents and treasures with those he loved and his community. He was a volunteer at St. Clare's Hospital and the City Mission. He was a member of the ALCO Club, a lifelong communicant of St. Anthony's Church, where he was a member of the former Holy Name Society, the Pastoral Council and an Eucharistic Minister. Tony was predeceased by his beloved wife Ann M. Bunk Riccio, on September 19, 2013, after 63 years of marriage; and his loving son Michael L. Riccio, on January 23, 2012; siblings, Frank Riccio and Armand Riccio, Esq. He is survived by his devoted daughter, Patricia DeCesare and her husband Don, of St. Augustine, FL; and his grandchildren; whom he adored; Meribeth Gilbert and her husband Kyle of Birmingham, AL, John DeCesare of Tulsa, OK and Andrea Riccio, and her Fiancé Dustin Todd, of Washington, DC ; great-granddaughters, Ansley, Margaret and Vivian Gilbert, of Birmingham, AL; a sister-in-law, Josephine Riccio, and his former daughter-in-law, Cathy Gruyters and her husband, Sean Albert, of Schenectady. Services will be held on Friday, at 10 am from the Rossi & Ditoro Funeral Home, 501 Union Street and then to St. John the Evangelist Church, where a Mass will be celebrated at 11 am. Entombment will follow in Sts. Cyril & Method Cemetery, Rotterdam. Relatives and friends are invited and may call at the Rossi & Ditoro Funeral Home on Thursday evening from 3 to 7 pm.

ST. AUGUSTINE, FL &#8211; Anthony A. Riccio, 91, formerly of Schenectady, entered into eternal peace on Thursday, February 11, 2016 at the Baptist Medical Center South, after a brief illness. Tony was born in Schenectady, a son of the late... View Obituary & Service Information

The family of Anthony A. Riccio created this Life Tributes page to make it easy to share your memories.

Send flowers to the Riccio family.