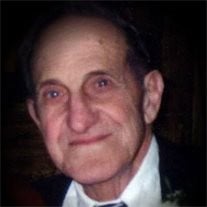 ROTTERDAM – Anthony D. 'Tony' Iannotti, 83 died Monday at home. Tony was born December 16, 1928 a son of the late Antimo 'Andy' and Mary Raiano Iannotti. He entered into the United States Army at the age of 17, forgoing his senior year of high school. He served as a Military Policeman and was honorably discharged in 1947. Thanks to a legislation know as "Operation Recognition" Anthony was recently awarded his high school diploma by Assemblyman George Amadore. This was a very proud moment for him. Tony was employed as a truck driver of Latanzio, Boss Linco and Price Chopper for many years. He retired from the Golub Corporation as a dispatcher and was a member of the Million Mile Club. He was a communicant of Our Lady Queen of Peace Parish. He was predeceased by his eight siblings, Ralph, Joseph, Louis, John, Madeline, Edith, Rosalie and Lucy. Anthony is survived by his devoted wife of 61 years, Norma Delory Iannotti, loving children, Paula Iannotti, of Silver Springs, MD, Jackie Caruso and her husband Louis, of Rotterdam and Patrick Iannotti, of Bennington, VT; he was most proud of his five adoring grandchildren, Nicole Tiscione, Michael Caruso and his wife Megan, Owen, Abigail and Anna Grace Iannotti; loving brother, Andrew Iannotti and his wife Marilyn, of Amsterdam; in-laws, Eleanor LaMalfa and Norman Martin; many nieces and nephews. Services will be held on Friday morning at 8:30 am from the Rossi & Ditoro Funeral Home, Union at N. Jay Street, then to Our Lady Queen of Peace Church, Princetown Road, where a mass will be celebrated at 9:30 am. Interment with military honors will be held at a later date in Sts. Cyril & Method Cemetery, Rotterdam.. Relatives and friends are invited and may call at the Rossi & Ditoro Funeral Home, Thursday from 4 to 7 pm. Memorial contributions may be made in Anthony's memory to St. Jude's Children's Hospital, 501 St. Jude Place, Memphis, TN 38105.

ROTTERDAM &#8211; Anthony D. 'Tony' Iannotti, 83 died Monday at home. Tony was born December 16, 1928 a son of the late Antimo 'Andy' and Mary Raiano Iannotti. He entered into the United States Army at the age of 17, forgoing his senior year... View Obituary & Service Information

The family of Anthony 'Tony' Iannotti created this Life Tributes page to make it easy to share your memories.

Send flowers to the Iannotti family.