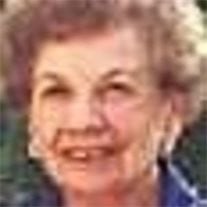 GLENVILLE – Ann M. Riccio, 87, passed away on Thursday, September 19, 2013, she is now reunited in heaven with her loving son Michael. Ann was born in Schenectady, on August 14, 1926 the daughter of the late Louis and Elizabeth Madelone Bunk. Ann was a graduate of Mt. Pleasant High School. She worked as a glove maker for the Knitting Company in Schenectady, then as a secretary, working for the Army Depot, ALCO Products, Armand Riccio, Esq. and the General Electric Company, where she retired from in 1986. Ann was a gracious and loving woman, devoted to her family, friends and her faith. She was a communicant of St. Anthony's Church and a member of the Sacred Heart League. Ann was predeceased by her son Michael in 2012. She is survived by her devoted and beloved husband of 63 years, Anthony A. Riccio, of Glenville; loving daughter Patricia DeCesare and her husband Don, of St. Augustine, FL; adoring grandchildren; Meribeth Gilbert and her husband Kyle of Birmingham, AL, John DeCesare and his wife Nicole of St. Augustine, FL and Andrea Riccio, of Washington, DC ; great-granddaughters, Ansley, Margaret and Vivian Gilbert, of Birmingham, AL; a sister-in-law, Josephine Riccio, and her former daughter-in-law, Cathy Gruyters and her husband Sean Albert, of Schenectady. The family would like to thank the caring staffs of S3, especially Cathy and Randi at Baptist Health, and Ellis Hospital, C1 and the ICU for their support and compassion during Ann's illness. Services will be held on Monday at 9:30am from the Rossi & Ditoro Funeral Home, Union at N. Jay Streets then to St. Anthony's Church, Seward Place, where a Mass will be celebrated at 10:30 am. Entombment will follow in Sts. Cyril & Method Cemetery, Rotterdam. Relatives and friends are invited and may call at the Rossi & Ditoro Funeral Home Sunday from 3 to 6 pm.

GLENVILLE &#8211; Ann M. Riccio, 87, passed away on Thursday, September 19, 2013, she is now reunited in heaven with her loving son Michael. Ann was born in Schenectady, on August 14, 1926 the daughter of the late Louis and Elizabeth Madelone... View Obituary & Service Information

The family of Ann M. Riccio created this Life Tributes page to make it easy to share your memories.

Send flowers to the Riccio family.