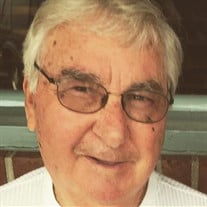 ROTTERDAM – Angelo R. Catalano, 86, entered into eternal peace on Saturday, September 29, 2018 at Ellis Hospital, surrounded by his loving family, due to complications from Parkinson’s Disease. Angelo was born in Schenectady on December 30, 1931 a son of the late Anthony and Josephine Catalano. He was a graduate of Nott Terrace High School and honorably served in the US Army during the Korean War. Angelo was employed as a welder for the General Electric Company, retiring in 1988 after 30 years of service. He was a member of the Rotterdam Elks Club; an avid bowler and golfer. A man of integrity, kindness and generosity, Angelo treasured his family. Above all, the light of Angelo’s life was his grandchildren. He was blessed to be so active in their lives, either by attending their sporting events or listening to their stories; he was so proud to relish in their accomplishments. Angelo married the love of his life, Phyllis Valenti Catalano on October 20, 1956; she predeceased him on August 26, 2000, after 43 years of love and devotion. He was predeceased also, by his siblings, Sam Catalano, Ralph Catalano and Gloria Meyer. He is survived by his loving daughters, Angela (Amerigo) Reali, Donna (Paul) Notar and Patricia (Eugene) Riggi; adoring grandchildren, Paul (Christina) Notar, Michael and Anthony Notar, Danielle and Nicholas Reali and Olivia and Ava Riggi; sisters, Josephine Zannitto and Angelina Vroman; several nieces and nephews. Services will be held on Thursday at 9 am from the Rossi & Ditoro Funeral Home, 501 Union Street, and then to St. Anthony’s Church, Seward Place, where a Mass will be celebrated at 10 am. Interment will follow in St. Anthony’s Cemetery, Glenville. Relatives and friends are invited to call at the Rossi & Ditoro Funeral Home, on Wednesday from 3 to 7 pm. In lieu of flowers, memorial contributions may be made in Angelo’s memory to St. Jude’s Children’s Hospital, online at stjude.org.

ROTTERDAM &#8211; Angelo R. Catalano, 86, entered into eternal peace on Saturday, September 29, 2018 at Ellis Hospital, surrounded by his loving family, due to complications from Parkinson&#8217;s Disease. Angelo was born in Schenectady on... View Obituary & Service Information

The family of Angelo R. Catalano created this Life Tributes page to make it easy to share your memories.

Send flowers to the Catalano family.