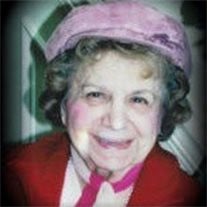 Norristown, PA- Angela Delores Nappi, 94, formerly of Schenectady and Poughkeepsie, NY, passed away on November 2, 2011. Born in Syracuse on October 10, 1917, she was the daughter of the late Rose Altieri Bucci and Joseph Nappi and stepdaughter of the late Patrick J. Bucci. Angela was raised in Schenectady and received her associate's degree from the Mildred Elley School of Business in Albany. From the time she was a young woman in the 1930's, and for almost 60 years, she and her mother operated Rose's Bridal Shoppe in Schenectady and created custom designed bridal and formal gowns for several generations of women in the tri-cities. Perhaps best known as the author of the Gazette's Weekly Prayer, Angela began writing as a young child. But it wasn't until the dark days before World War II that her tenure of more than 60 years with the Gazette began; and her first published piece was about a soldier on furlough for Thanksgiving in 1942. Angela's writing had a unique ability to connect with a diverse audience and extended beyond the Gazette to radio and special requests. In 1994, the Rev. Richard Carlino of St. Anthony's Church in Schenectady asked her to write a prayer that was recited as part of weekly Mass for many years. In the 1960's, Angela relocated to Poughkeepsie, NY when her husband, Fred Sakalay, accepted a position with IBM. She clocked a lot of Thruway miles as she commuted between home and the bridal shop. In Poughkeepsie, Angela was a very active member of the community serving on the board of directors of the Girl Scouts, the Red Cross and the United Way and still found time to bake her delicious apple pies. In 2009, Angela and Fred relocated to Stony Creek Farms in Norristown, PA. Throughout her life, Angela was the embodiment of faith in action. Her warmth, her ability to inspire and her sense of humor will be dearly missed. She is survived by her beloved husband of 61 years Fred E. Sakalay, devoted daughter Anne Rose Sakalay and her husband John J. Olivieri, of Norristown PA, dear cousin Anna Grasso and her husband Nicholas of Schenectady and the many fans of her writing. Services will be held Monday at 10 AM at the Rossi & Ditoro Funeral Home, Union at N. Jay Street, followed by a Mass of Christian Burial to be celebrated at 11 AM at St. Anthony's Church, Seward Place. Interment will follow in the Altieri Family Plot at St. John the Baptist Cemetery, Brandywine Avenue. Relatives and friends are invited and may call at the Rossi & Ditoro Funeral Home Sunday afternoon from 2 to 5 PM.

Norristown, PA- Angela Delores Nappi, 94, formerly of Schenectady and Poughkeepsie, NY, passed away on November 2, 2011. Born in Syracuse on October 10, 1917, she was the daughter of the late Rose Altieri Bucci and Joseph Nappi and stepdaughter... View Obituary & Service Information

The family of Angela Delores Nappi created this Life Tributes page to make it easy to share your memories.

Send flowers to the Nappi family.