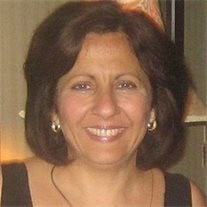 NISKAYUNA - Angela Cusano, 55, entered into the peacefulness of Heaven on Friday, October 31st surrounded by her loving family. Angela was born on New Years Day, 1959 in Rensselaer a daughter of Anita DeSantis Verrelli and the late Raymond Verrelli. She was a 1978 graduate of Rensselaer High School, and Colona School of Beauty. Angela was employed by the NYS Department of Taxation and Finance in Albany for 30 years, before the onset of her illness. Angela was a kind and gentle spirited woman with a devoted love for her family and friends. Her natural beauty radiated from within and shown brightly through everyone she embraced. She enjoyed vacationing on the Jersey Shore and was a communicant of St. Kateri Tekakwitha, Rosa Road. Angela was predeceased by her father Raymond Verrelli. She is survived by her beloved husband and caregiver of 28 years, Carl Cusano, Jr., whom were married on July 19, 1986; loving children, Christina Cusano and Mark Cusano, all of Niskayuna; adoring mother, Anita Verrelli, of Rensselaer; siblings, Marie (Salvatore) Mele, of Troy, Raymond A. (Susan) Verrelli, of East Greenbush; Tina (Paul) Maloney, of Troy and Gina Verrelli, of Rensselaer; nieces and nephews, Jennifer (Marc) Murphy, Michael Verrelli and Melissa Maloney and a great nephew, Mason Murphy; an aunt Agatha Verrelli; father-in-law, Carl Cusano, Sr., sister-in-law Michelle Cusano; many cousins and a grand-puppy, Bibbles. The Cusano family is eternally grateful to the entire staff of St. Peter's Hospital ALS Center, Dr. Miller, RN Manager Kim McClintock and Community Hospice, for the care, support and professionalism extended to them throughout Angela's illness. Services will be held Tuesday morning at 8am from the Rossi & Ditoro Funeral Home, 501 Union Street, at (N. Jay) then to St. Kateri Tekakwitha, Rosa Road, where a Mass will be celebrated at 9am. Interment will follow in Most Holy Redeemer Cemetery, Niskayuna. Relatives and friends are invited and may call at the Rossi & Ditoro Funeral Home on Monday from 4 to 8. Memorial contributions may be made in Angela's memory to St. Peter's Hospital ALS Center, 19 Warehouse Row, Albany, NY 12205 or at www.sphcs.org/alsregionalcenter.com.

NISKAYUNA - Angela Cusano, 55, entered into the peacefulness of Heaven on Friday, October 31st surrounded by her loving family. Angela was born on New Years Day, 1959 in Rensselaer a daughter of Anita DeSantis Verrelli and the late Raymond... View Obituary & Service Information

The family of Angela Verrelli Cusano created this Life Tributes page to make it easy to share your memories.

Send flowers to the Cusano family.