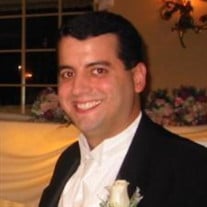 Williamsburg, VA -With great sadness we announce the passing of Andrew Domenico Panetta, of Williamsburg, Virginia, Schenectady, New York, and Fontechiari, Italy. Andrew was born in Schenectady, on July 9, 1974, to Marianne DiCarlo Panetta and the late Franco Panetta, Sr. He graduated from Rensselaer Polytechnic Institute in May 1999, with a Master of Science degree in Aeronautical Engineering. Andrew proudly worked as an Aerospace Engineer at NASA. He began his NASA career in 2006, at Langley Research Center. Andrew served the Agency with distinction as a design engineer and technical manager. While at NASA, he was the project manager for an experimental rocket program called HIFIRE. He was a subsystem manager for the SAGE III Project, an Earth science system now operating on the International Space Station, for which he received an Exceptional Achievement Medal at NASA Langley Research Center’s Honor Awards Ceremony in 2016. Currently he served as the spacecraft integration manager for the TEMPO project, an air quality instrument scheduled to launch in 2022. Andrew was well regarded by his NASA colleagues, friends, and family and will be missed dearly. He was predeceased by his father, Franco, Sr.; grandparents, and numerous relatives both in the United States and Italy. He is survived by his mother; Marianne, brother; Franco Panetta, Jr., sister in-law, Tara; and his nieces, Cristina and Daniela. He was a second father to them providing love, guidance and support as if they were his own. He is also survived by aunts and uncles; Olga (Rolando) DiCocco, Luigi (Mia) DiCarlo, Gina Bianchi, and Antonietta (Alberto) Martino; numerous first, second and third cousins, friends, coworkers, and his former wife Jacqueline Young. A Mass of Christian Burial will be celebrated on Monday, July 20th at 9:45 am at St. Anthony’s Church, 331 Seward Place. Relatives and friends are invited to attend. Entombment will follow in Most Holy Redeemer Cemetery. In lieu of flowers, please consider donations to Andrew’s favorite charities, the local food bank; children’s health and welfare charities, or St. Anthony’s Church.

The family of Andrew Domenico Panetta created this Life Tributes page to make it easy to share your memories.

Williamsburg, VA -With great sadness we announce the passing...

Send flowers to the Panetta family.