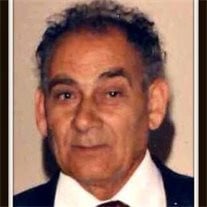 SCHENECTADY - Americo Paniccia, 89, passed away peacefully on Tuesday May 2, 2017, after a short illness at Ellis Hospital surrounded by his loving family. Americo was born in Giglio, province of Frosinone, Italy on September 21, 1927, a son of the late Armando and Loreta (Cestra) Paniccia. Americo proudly served in the Italian Army during WWII, after which he located to Venezuela residing there for 13 years working as an over the road truck driver. In 1961, Americo immigrated to Schenectady with his young family to provide a better life and opportunity for those he loved. He worked at Schenectady Concrete Products for over 30 years and later as a welder for Schenectady Steel. A hard working devoted husband, father and master gardener with hands made of muscle and gold, Americo provided for his family and tended to his garden and yard year round. He shared his harvest with family and friends and made wine annually. He was a faithful communicant of St. Anthony's Church, a member of the Holy Name Society and the Gabriele D'Annunzio Lodge #321, Order of Sons of Italy in America. He was predeceased by his loving wife, Anna Rondon Paniccia on July 17, 1972; and his brothers, Roberto and Antonio Paniccia. He is survived by his beloved wife, Antoinetta (Valentino) Paniccia, whom he married on June 28, 1973; devoted sons, Armando (Nancy) Paniccia, of Sarasota, FL, Paul Paniccia, of Schenectady, and Rico D. (Sandra) Paniccia, of Latham; loving grandchildren, Nicholas, Michael, Jenna, Brandon and Pietro Paniccia; sisters, Ada Rotondo, of Toronto, Canada and Paola Sirizzotti, of Italy; several nieces and nephews. Services will be held on Saturday at 8:30 am from the Rossi & Ditoro Funeral Home, 501 Union St., and then to St. Anthony's Church, Seward Place, where a Mass will be celebrated at 9 am. Interment will follow in St. Anthony's Cemetery, Glenville. Relatives and friends are invited and may call at the Rossi & Ditoro Funeral Home on Saturday morning from 7:30 to 8:30 am. Memorial contributions may be made in Americo's memory to St. Anthony's Church Restoration Fund. 331 Seward Place, Schenectady, NY 12305.

SCHENECTADY - Americo Paniccia, 89, passed away peacefully on Tuesday May 2, 2017, after a short illness at Ellis Hospital surrounded by his loving family. Americo was born in Giglio, province of Frosinone, Italy on September 21, 1927, a son... View Obituary & Service Information

The family of Americo Paniccia created this Life Tributes page to make it easy to share your memories.

Send flowers to the Paniccia family.