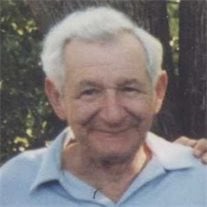 Americo Mid R. Massaroni, of Schenectady passed away after a long illness on Friday, July 20, 2012 surrounded by his loving family . Born in 1928, he was the son of the late Ignazio and Luisa (Papetti) Massaroni. Mid was raised in Schenectady and graduated from Nott Terrace High School. He joined the army in 1946 and served in post war Japan. After his discharge he came back to Schenectady to start his 39 year career with the General Electric Company. He graduated from the apprentice course, and his career advanced until he retired as a methods and efficiency specialist in the Turbine Department. Mid married Grace Ferraro in 1949, later referring to this as the best thing that he ever did. Along with being a dedicated family man, Mid loved to play, and was always competitive, striving to achieve excellence. He was a lifelong bowler, and was the secretary of the Amity Hall Bowling League from 1953 until being recently forced to focus his energy on battling illness. He was also an avid golfer, playing in the City Hall Golf League for many years. Mid passed on his love of play and his enthusiasm for excellence to his children, each of whom has numerous achievements in athletics. He is survived by his loving wife of 63 years, Grace Massaroni; four children, Linda, Steven (Maria Dos Santos), Robert (Nora Holland), and Mary (Norman) Perazzo; five grandchildren, Jessica (Bryan) Woliner, Leah and Eddie (fiancé Catherine) Perazzo, and Ian and Isabel Massaroni; and has one great-grandchild, (little buddy) on the way. He is also survived by brothers, Dante (Gloria) Massaroni, and Mario Massaroni; and sisters, Norma (Richard) Silaika, and Mary Gorman; sisters-in-law, Marianne Cook, Catherine (Brian) Dooley, Rose Walker and many nieces and nephews. He was predeceased by brothers-in-law, Elliot Gorman, John Cook; sister-in-law, Jeanne Massaroni and in-laws, Peter and Carmela Ferraro. The family would like to express their gratitude for the excellent care provided by numerous medical staff members that helped treat Mid's long illness. This, along with his strong will to live, added many years of quality to Mid's life. Viewing hours will be 5 p.m. to 8 p.m. on Monday, July 23 at the Rossi & Ditoro Funeral Home on Union Street at North Jay Street. Funeral services will begin at 8 a.m. on Tuesday, July 24 at the funeral home, followed by a Mass of Christian Burial to be concelebrated at St. Paul the Apostle Church on Albany Street and King's Rd. in Schenectady at 9 a.m. Interment will follow at St. Anthony's Cemetery on Glenridge Road in Glenville. Memorial contributions may be made to St. Jude Children's Research Hospital .

Americo Mid R. Massaroni, of Schenectady passed away after a long illness on Friday, July 20, 2012 surrounded by his loving family . Born in 1928, he was the son of the late Ignazio and Luisa (Papetti) Massaroni. Mid was raised in Schenectady... View Obituary & Service Information

The family of Americo 'Mid' Massaroni created this Life Tributes page to make it easy to share your memories.

Americo Mid R. Massaroni, of Schenectady passed away after a...

Send flowers to the Massaroni family.