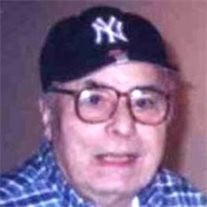 SCHENECTADY – Alfred J. Lombardi, 95, entered into the Arms of the Lord on Monday at Ingersoll Place, surrounded by his loving family. Al was born in Schenectady a son of the late Francesco and Maria Caldara Lombardi. He was a graduate of Mt. Pleasant High School and enlisted in the United States Army. He honorably served his Country as a corporal during WWII in the Central Pacific. On Sunday, December 7, 1941, Al witnessed and survived one of the most heinous attacks on US soil, the bombing of Pearl Harbor. As a young boy, he began learning the shoe repair trade, continuing it after his discharge from the army. Al apprenticed in the trade and was a master craftsman for over 73 years. He owned and operated the Towne Shoe Repair with his son, Frank Sr., until his health led him to retirement within the past few years. He was a man of devout faith and was a daily Mass communicant. Al was a sports enthusiast, and a fanatic Yankee fan. He grew up with the Babe and wanted to see Jeter inducted into the Hall of Fame. Al taught his family and friends by example, sharing with them his love of life, faith and sports. Words can not express the gratitude to the staff of Ingersoll Place, for the care and support shown to our father over the past months, enabling him to live his last years of life with dignity. The family would like to express a thank you to the staff of Community Hospice of Schenectady for their care and compassion. We would like to thank dad's doctor's who provided him with wonderful care, Dr. Arthur Stevens, Dr. William Vacca, Dr. Gorge Giokas and Dr. Thomas Schumacher. He was predeceased in life by his beloved wife Ann Balasco Lombardi on May 7, 1998 after 42 years of marriage and his siblings, Anthony and John Lombardi, Nellie Corrado, Mary Papa and Rose Mancini. Al is survived by his loving children, Frank Lombardi, Sr. and his wife Lori, of Niskayuna, Mary Horgan and her husband Tom, of Wilton and Veronica Della Villa, and her husband Sal, of Charlotte, NC; adoring grandchildren, Tripp, Katie, Frank Jr., Anthony and Caroline; many nieces and nephews also survive. Services will be held on Thursday at 10am from the Rossi & Ditoro Funeral Home, Union at N. Jay Street and then to St. Paul the Apostle Church, Albany Street where a Mass will be celebrated at 11am. Interment will follow in St. Joseph's Cemetery, Kings Road. Relatives and friends are invited and may call at the Rossi & Ditoro Funeral Home on Wednesday from 4 to 7 pm. Memorial contributions may be made to in Al's memory to the Wounded Warrior Project at www.woundedwarriorproject.org or to Ingersoll Place Endowment Crusade & Capital Campaign, 3359 Consaul Road, Schenectady, NY 12304.

SCHENECTADY &#8211; Alfred J. Lombardi, 95, entered into the Arms of the Lord on Monday at Ingersoll Place, surrounded by his loving family. Al was born in Schenectady a son of the late Francesco and Maria Caldara Lombardi. He was a graduate... View Obituary & Service Information

The family of Alfred J. Lombardi created this Life Tributes page to make it easy to share your memories.

SCHENECTADY – Alfred J. Lombardi, 95, entered into the Arms of...